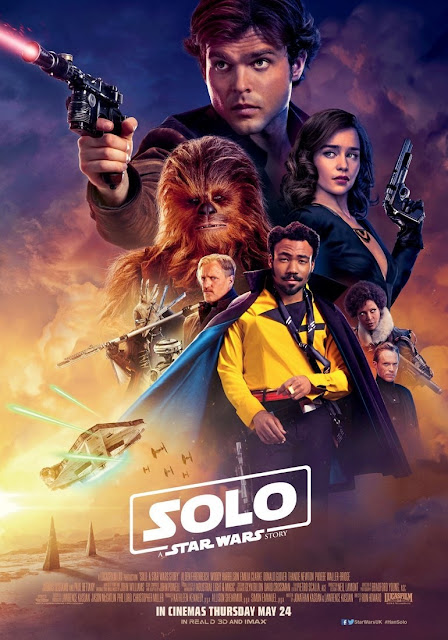 
As most people know by now, the second Star Wars anthology film has been plagued by controversy since the surprise firing of the film's co-directors, Phil Lord and Christopher Miller, best known as the directors of The Lego Movie and the 21 Jump Street films. The duo were quickly replaced by Academy Award winner Ron Howard, but this didn't stop the negative buzz on the internet, much of it centring around the film's star, young Alden Ehrenreich. Some internet fans were outraged and disappointed.  There was weeping, wailing, gnashing of teeth and wild rumors that Ehrenreich couldn't act, complaints about Howard being a lousy director with no sense of style (a persistent complaint that oddly seems to be uneffected by movies like Apollo13 and Rush that Howard expertly directed and infused with his strong sense of style, or the fact that most of the the celebrated, groundbreaking stylistic edge of the BBC's excellent series Sherlock was lifted from A Beautiful Mind and even The Da Vinci Code) stories that Disney was expecting the film to bomb, and pretty much every doomsday scenario you can imagine.

Thankfully, these fears were unwarranted, as Solo: A Star Wars Story turns out to be a wildly entertaining summer thrill ride, and Ehrenreich delivers a delightful, star-making performance (which didn't come as a surprise to us after seeing him steal the Coen brothers comedy, Hail, Caesar! from an all-star cast.)

Solo: A Star Wars Story, of course tells the story of a young Han Solo, the beloved smuggler and scoundrel brought so memorably to life by Harrison Ford. Asking anyone to step into one of the most iconic roles, one of the most popular movie stars of all time is a tall order, and the pressure on Ehrenreich must have been agonizing.  But Ehrenreich truly makes the role his own in this film, channelling Ford's charm without doing a self-conscious impression (which would have been a disastrous choice.)


The whole cast is perfect, with two of the best actors working today, Woody Harrelson and Paul Bettany, adding a lot to the film, and Donald Glover brilliantly channeling Billy Dee Williams as Lando (doing more of an impression than Eherenreich does, but in a Karl Urbanesque way that allows him to still act.)

Emilia Clarke is a nice presence as Han's love interest, Qi'ra, Jon Favreau and especially Phoebe Waller-Bridge as Lando droid, L3, are scene-stealers. But there is only one performance that overshadows Ehrenreich, and it comes from Han Solo's rather tall shadow.  Joonas Suatamo is so utterly perfect and inspires so much joy as Chewbacca that he should now be fully accepted as a great Chewie in his own right who brings a fresh energy to the role, and not just viewed as a Peter Mayhew stand in.

Ron Howard delivers big time with his direction. He stages and films action sequences with the kind of style, flair and confidence that comes from decades of experience, and while Solo: A Star Wars Story may not be the sweeping, emotional epic that, say, The Last Jedi was, it's as intense a roller coaster ride as the franchise has given us. Ron Howard is often taken for granted as a director and not given the respect he deserves. But Opie has a gift for fluid storytelling and a deft touch with actors, and when he's got his mojo working he's one of the best technical craftsmen in the business. It doesn't hurt that he's got two of the best best editors working with him here in Oscar winners Pietro Scalia (JFK and Black Hawk Down) and Christopher Rouse (The Bourne Ultimatum.)

This is really an action/adventure film that sometimes, appropriately enough, feels like an Indiana Jones movie in space, and Howard's major set pieces are comparable to Spielberg.  It's eye popping, edge of your seat fun.


And the script, by Lawrence Kasdan and his son Jonathan, is a winner. The elder Kasdan knows Han Solo as well as George Lucas or Harrison Ford, having written or co-written The Empire Strikes Back, Return of the Jedi and The Force Awakens. The movie also plays more than a bit like a western, and the since the elder Kasdan gave us one of the all time great westerns, Silverado, that is entirely a good thing (there's even a subtle reference to that film as actress Linda Hunt provides a voice) The father and son duo has written a script that that's fast moving, funny and full of the twists and turns you want from a movie about criminal lowlifes. And if that makes it occasionally difficult to follow, it doesn't really matter. It's so much fun, and the development of the classic characters is appropriate and satisfying, especially the relationship between Han Solo and Chewbacca, which is both funny and at times touching.

It is worth noting that Star Wars movie fans who think they are two good for the "cartoons" (the excellent Clone Wars and even better Rebels series)  might find themselves with a moment of confusion, but it's not going to ruin the movie for them any more than Thanos' appearance at the end spoiled The Avengers for those of us who didn't read the Marvel comic books.

Nervous fans should breathe a sigh of relief: Solo is a triumph, and the new era of Star Wars is now a victorious four out of four (and that's not even counting Rebels.). It may be the most lightweight of the new Star Wars films, with lower stakes to the story, but that's entirely appropriate to a young Han Solo adventure. And what an adventure it is.