Movie Review: "Life Of The Party" Has Just Enough Life (And Laughs) To Be Enjoyable 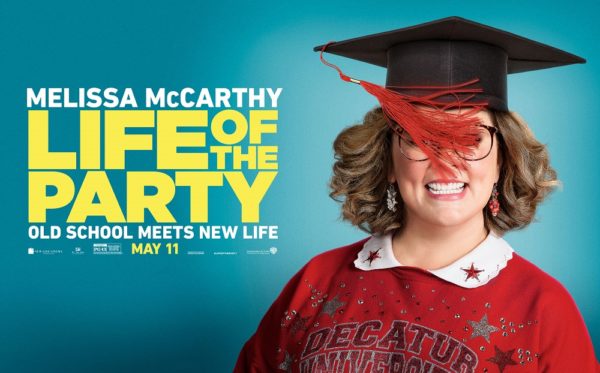 Life of the Party follows Deanna Miles (McCarthy), a middle aged wife and daughter who is told by her husband that he wants a divorce literally right after the couple drops their daughter off for her senior year at college. At a loss as to what to do with herself now, Deanna decides that her biggest regret in life is never having finished her degree, and she takes a leap and enrolls in college, where she will living on the same campus as her daughter.

McCarthy gives a lovable performance, and it is easy to root for her character, even when she's being a bit clueless about how she is effecting her daughter (and one of the weakest elements of the film is the failure to go even as deep as the average episode of Family Ties where Mallory resents Elysse and starts acting out and throws an embarrassing tantrum in public and all is resolved later in the magical kitchen of understanding.). Maya Rudolph gets her share of laughs (most of them cheap) in the one note role of Deanna's best friend, but the breakout performances and funniest characters by far are Gillian Jacobs and Heidi Gardner as Helen and Leonor, respectively. Helen is a sorority sister who started college a bit late because she spent eight years in a coma (when I actually type that out, it doesn't sound funny at all, but Helen's personality, combined with the way she deals with her Internet celebrity status are amusing and endearing.). Leonor is Deana's bizarre goth roommate, who sleeps most of the time and never actually seems to attend class.

This is very much a by the numbers comedy, and the injection of some reality could have gone a long way. But it has enough solid laughs to please audiences, and I tend to prefer McCarthy when she's not playing the loud and obnoxious slob roles (Tammy and The Heat come to mind.). As disposable comedy goes, this isn't the painful slog that the last two Pitch Perfect movies have been, but it plays more like an extended trailer than an actual movie, and by the time we get to the painfully silly rock star celebrity cameo ending, any pretence that you are watching something with aspirations beyond being a marketable product is completely gone. Director Ben Falcone doesn't do a very good job creating an ensemble, and the performances are all solid on their own but don't mesh well together.

The movie does a fair amount of mileage out of making you hate Deanna's husband/ex-husband, and while elements of that relationship ring uncomfortably true, it's another area that could have been a lot more fleshed out. The character is so cartoonish and devoid of redeeming qualities that his daughter even showing up to his new wedding or inviting him to her graduation seems like a bit of a stretch even if he is her father. Even weaker is McCarthy's fling with a hot young student who becomes enamoured because of her experience in the bedroom (which doesn't really mesh with the rest of the portrayal of the character.). For reasons I won't spoil, this relationship ranks as perhaps the biggest contrivance in a film brimming over with them, and one can't help but feel that McCarthy the writer (and her husband the co-writer/director) owed McCarthy the actress the extra effort to make this a genuinely involving character based story about self discovery (and it has plenty of potential to be one.).

Still, it's fun and funny in its own way, and Life of the Party is really rather a simple decision: if you watch the trailer and think "I've got to see that", then you'll find it worth the price of the ticket. If you feel more like "That's a Redbox night", go with that feeling.