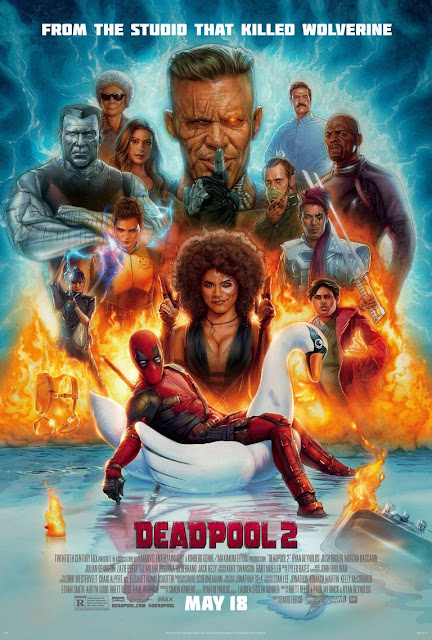 
I'm late to the party on Deadpool. I hate red band trailers with a passion, because far too often they are used to sell the movie to the crowd that just cares about graphic content and hearing lots of curse words. That doesn't offend me on a moral level, but it does on an artistic and comedic one. The red band trailers for the original Deadpool were far more based around proving how R-Rated it could be than how funny it could be, and when I missed the press screening due to illness, I just couldn't get excited about seeing it.  When I did, there was a lot I liked, but I could not have cared less about the revenge story and despite all of the buzz about how innovative the movie was, that element was strictly by the numbers.

As Deadpool 2 opens, Wade Wilson (Ryan Reynolds) has been working successfully as the super mercenary Deadpool for two years. He is also celebrating his anniversary with girlfriend Vanessa  (Firefly's Morena Baccarin.)  Despite Wade's roguish past and personality, the pair decide to start a family together, but fate has other plans for them.

After being injured in an explosion, Wade spends his recovery time at the Xavier mansion, and  agrees to join the X-Men as a form of healing. He, Colossus, and Negasonic Teenage Warhead respond to a standoff between authorities and the unstable young mutant named Russell (Hunt For The Wilderpeople's Julian Dennison), at an orphanage, labelled a "Mutant Reeducation Center." Something doesn't feel right to Wade, and he takes the kid's side, which gets him into trouble, especially when the mysterious Cable (Josh Brolin,) a time travelling cybernetic soldier shows up intent on killing Russell, who prefers the name "Firefist."


The story is a lot more engaging and complex this time around (even with the impossible to miss Terminator similarities, which of course do get directly referenced, though it manages to beat out the many Hugh Jackman references for the weakest pop culture joke in a film that is full of them, simply because the writers screwed up the punchline.). But every one of the major characters has a more interesting motivation than Wade was given in the first film, and it plays out at a fast pace that is punctuated by a lot of genuine belly laughs and dazzling action sequences, as director David Leitch (the uncredited co-director of John Wick) uses all of the skills he showed off in Atomic Blonde but gets a better story and much better characters this time around.

Reynolds really could not be better in the title role (and that is a significant statement, because I'm not a superfan. I have fluctuated wildly on my opinion of him as an actor and couldn't decide if I found him funny or just annoying in the first film), and the addition of Brolin as someone to play off of creates a perfect pairing ( I often start to write the phrase "couldn't give a bad performance if he tried" in reference to Brolin but then remembered Jonah Hex.). Zazie Beetz is a great addition as Domino, a superhero whose power is an excess of luck, and Dennyson, while he doesn't come close to getting the chance to shine the way he did in Wilderpeople, still gives Russell a sense of being a real kid with very real emotions. I was expecting a lot of cheap jokes about his weight, and was very pleasantly surprised when they never came.

There's still a lot of jaw dropping sexual references and near constant profanity, but it feels a bit less like a crutch this time around. If you were offended and outraged by the first movie, this one isn't going to win you over, and it does get a bit too frenetic at times. But the addition of a moral compass to Wade's character made all the difference, though in the end I can't hold the lack of it too much against the first film because it made his growth in this one all the more satisfying (and if you don't see the film, be prepared that any conversation that involves the character's "growth" is going to be met by weird giggles from fans, but it's not what you're thinking.).

I never expected to become a fan of this franchise, and I still think it has the potential to run out of steam, but there is far too much reason to be excited about where it's going from here (especially with Brolin signed for more), and I hope that Leitch signs on for the next instalment. And even though this isn't Marvel Studios, you still want to stay through the credits, as some of the biggest laughs come midway through.).