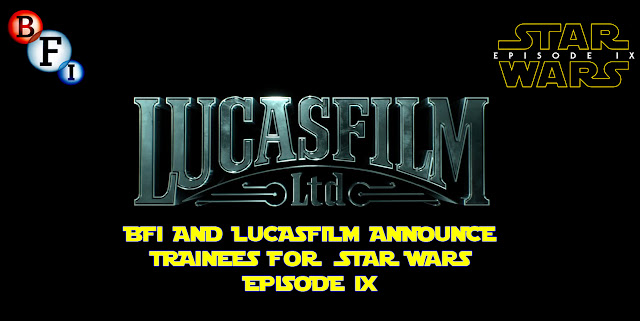 At a special presentation of Solo: A Star Wars Story at BFI Southbank tonight the BFI and Lucasfilm announced the next round of the pioneering BFI Film Academy Future Skills programme. Designed to give opportunities for a career in film to under-represented young people from all over the UK, the programme will have places for 30 new young people, the majority who are graduates from the BFI Film Academy, to work as paid trainees in a variety of craft and technical roles on the next Star Wars film, Episode IX, in production at Pinewood from July 2018.

This follows a hugely successful pilot of the programme with Lucasfilm on Solo: A Star Wars Story in 2017, in UK cinemas from 24th May 2018, which placed 28 trainees in production roles ranging from Sound and Lighting to Art Department and Camera. Some of the trainees discussed their experiences on stage at tonight’s event with cast members Phoebe Waller-Bridge, Thandie Newton, Solo Producer Simon Emanuel and Ben Roberts, Director BFI Film Fund and one of the architects of the programme alongside Lucasfilm.

The BFI Future Skills programme is an exemplar in industry-led training with a specific focus on giving young people from under-represented backgrounds the opportunity to work in film. In the first programme, 75% of the trainees were women, 45% came from BAME backgrounds, 68% were recruited from outside Greater London, and 36% received free school meals – a socio economic measure. Since completing Future Skills, many of the trainees have gone on to work on other productions including Artemis Fowl, Wonder Woman 2, Blinded by the Light, Men in Black, Dr Doolittle, Mary Poppins, Pinocchio andStar Wars Episode IX.

Margot James, Minister for Digital and the Creative Industries, said, “It is great to see the British Film Institute continuing to lead the way in creating a more diverse and inclusive workforce for our thriving film industry. Diversity is not only the right thing to do but it also makes good business sense.”

Jason McGatlin, Lucasfilm SVP of Physical Production and Executive Producer Solo: A Star Wars Story said, "This programme is so important in bringing more diversity behind the camera, which is vital if we are going to have films that represent the world we live in. The BFI Film Academy trainees took on their roles with great passion and commitment and it’s wonderful to see so many of them moving on to future careers in the industry. It’s been so successful that we are delighted to be working with the BFI on the next round of the programme with new trainees for Star Wars: Episode IX.’

Amanda Nevill, CEO BFI said, “I have often said that talent is everywhere, but opportunity isn’t. This brilliant and pioneering programme with Lucasfilm proves it’s true. I thank them for having the foresight to give these incredibly talented young people a genuine opportunity to develop their skills and confidence and learn from the very best on one of the most iconic film franchises in the world. Film and television is booming but its success depends on bringing more skilled workers to the industry and, crucially, ensuring the workforce is truly diverse and inclusive.”

The programme offers progression, experience and networking opportunities for all the trainees that participate. A dedicated alumni officer is on hand to provide support and care throughout the programme with regular mentorship from respective Heads of Departments (HODs). Roles across physical production will include Production, Art Department, Camera, Costume, Hair & Make-up, Sound, Video DIT and Visual Effects (VFX). In addition to these, new roles will also be sought in the following departments: Grips, Script, Accounts and Special Effects (SFX). Upon completion of the programme, alumni officers, HODs and the BFI work with the individual participants to plan and support their next steps. The aim is that trainees will be recommended for other jobs.

At the end of the second round, almost 60 talented trainees will have completed the pilot BFI Film Academy Future Skills programme, providing us with a deep insight into the challenges and opportunities of recruiting and developing young people for a career in the film industry – a key point in the BFI’s Future Film Skills strategy – and offering a proven model for entry-level trainee recruitment.

Maria Moss, from Manchester
Maria took part in the regional BFI Film Academy at HOME, Manchester, followed by the Craft Skills residential course at the National Film and Television School (NFTS). Maria was an Assistant Director (AD) trainee on Solo: A Star Wars Story and went on to work on Pokemon and has a confirmed AD position on Wonder Woman 2, shooting this summer.

Nathan Lloyd, from Birmingham
Nathan attended the BFI Film Academy at The Company (Birmingham). He was selected as a Camera trainee on Solo: A Star Wars Story. He has since gone on to work on the Sky TV Drama Bulletproof shooting in Liverpool and Gurinder Chadha’s Blinded by the Light.

Jordan Feemster, from Colchester
Jordan attended the regional BFI Film Academy at Signals Film Essex followed by the Craft Skills residential at the NFTS. Jordan was a Sound trainee onSolo: A Star Wars Story. He has since worked as a Sound Assistant on Amazon Prime’s hit show Outlander in Glasgow and is going on to work on the next Men in Black film on Sound 2nd unit.

The programme is part of the BFI’s Future Film Skills strategy, an industry-wide plan launched in June 2017 to encourage people with transferable skills and young people, especially those from under-represented groups, to join a booming industry – film, high-end TV, animation, VR and interactive media – that is recognised the world over for its highly skilled workforce and state-of-the-art facilities. There are significant opportunities for the film workforce, including key areas such as Production Department, Art Department, Construction, Electrical, Camera, Costume, Hair and Make-Up, Post-Production, and Visual Effects, with an estimated 10,000 new entrants to the industry needed and 30,000 job opportunities over the next five years.