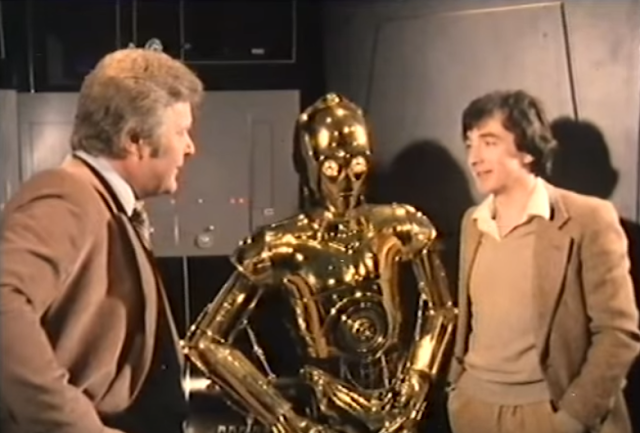 If you are of a certain age (in your forties) and grew up in the UK then you may remember a show from the late 70's and early 80's called Clapperboard.  It was hosted by Chris Kelly and was movie themed.  I remember watching this show as a kid with the hope of getting a new clip to an upcoming cinema release.  Remember, these were the days before instant information so here in the UK with out three TV channels, any news on Star Wars for example was grabbed with both hands.

Imagine my excitement when a whole show of Clapperboard was dedicated to Star Wars?  Well this particular episode which was originally broadcast in 1980 was 25 minutes of Star Wars behind the scenes magic.

It was filmed during the Empire Strikes Back exhibition at Selfridges in London (a further exhibition was held at Harrods for Return Of The Jedi in 1983). Interviewed on the programme are Anthony Daniels (C-3PO), David Prowse (Darth Vader) and Brian Johnson (Special Visual Effects).