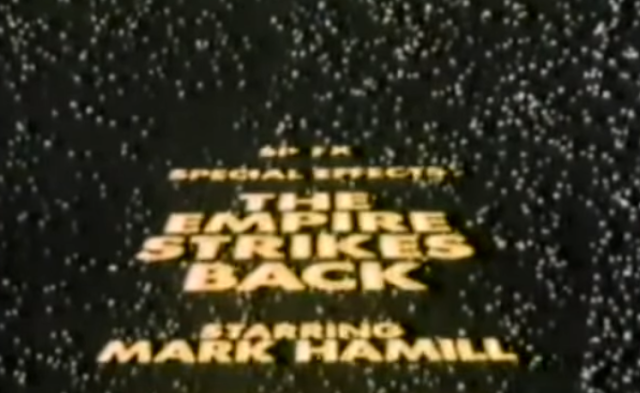 SP FX: Special Effects - The Empire Strikes Back A television documentary special which originally aired on CBS on September 22, 1980 in the United States.

SP FX: Special Effects - The Empire Strikes Back is a behind-the-scenes look at the creation of the special effects (SP FX) in the second Star Wars film, Star Wars Episode V: The Empire Strikes Back, which was released that year. The special was written by Richard Schickel and directed by Robert Guenette, who had both previously worked on the 1977 special The Making of Star Wars.

The special was hosted by Mark Hamill, who plays Luke Skywalker in the original Star Wars trilogy. It features behind-the-scenes footage from Star Wars Episode V: The Empire Strikes Back, and shows the making of various special effects sequences including the Imperial probe droid, the Tauntaun and Wampa ice creatures of the planet Hoth, the battle between the Imperial AT-AT Walkers and the Rebel Snowspeeders, the asteroid field sequence, the lightsaber duel between Luke and Darth Vader, and the Dagobah scenes and creation of the character Yoda which was voiced and performed by Frank Oz.

As well as showing how effects from Empire were made, the documentary reflects on the history of special effects in movies and includes clips from landmark effects films such as The Lost World, King Kong, Flash Gordon, Things To Come, The Thief of Baghdad, The Beast From 20,000 Fathoms, Them!, Mary Poppins, 2001: A Space Odyssey, The Hindenburg, the first Star Wars film, Close Encounters of the Third Kind and The Black Hole.