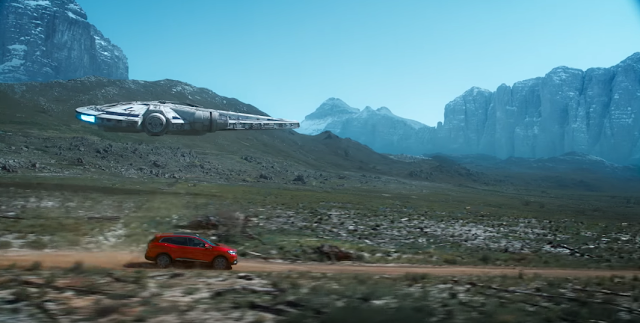 Renault have launched a new advertising campaign that features the upcoming Solo: A Star Wars Story.  The commercial features the Renault KADJAR which is a rather nice looking SUV (or 4 by 4 if you live in the UK.)

The advert is full of Star Wars and this particular one is part of their "Alternative Road" promotion.  A mother and her son are being chased by Cloud Riders so Chewbacca is on hand to protect them.  The Millennium Falcon sweeps in to help with the protection of the Renault Kadjar.

Also, to back up this new partnership between Renault and Lucasfilm, the French company are offering customers in Europe a go on a VR unit where you can witness new scenes with Han and Chewie.

Renault have this to say about their new advert:

"we'll find out how taking the alternative road led Han Solo to meet his mighty future co-pilot, Chewbacca. Now, thanks to the features of Renault KADJAR - 4x4 transmission, emergency breaking system and blind-spot alerts - Renault is offering its customers their chance to 'take an alternative road' too."

I drive a Renault but have yet to see Chewie, the Falcon or even an Ugnaught, however I have tried spinning because that's a good trick.

Solo: A Star Wars Story is in theaters on May 25.