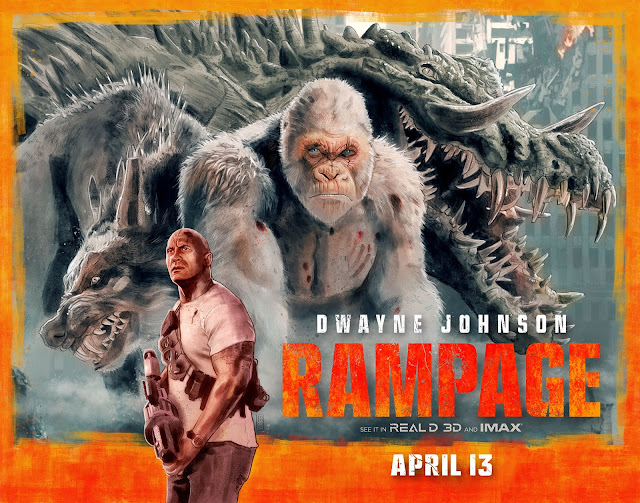 It's already a big year for us for for sheepish guilty pleasure, with Tomb Raider and Pacific Rim: Uprising, and now, the one and only video game that really holds a special (even sacred) place in our hearts is adapted into a big budget film. When we were teens in the 'early 90's, hanging out at the arcade at the mall playing Rampage was a favorite pastime. The thing we loved most about it was that it was done from the monster's point of view. It's a lot more fun to smash building and eat people than it is to shoot at creatures.

The movie faced a big obstacle on this level: Rampage was never about the humans, and nobody wants to root against George, Ralph and Lizzie. How do you get around this?  Director Brad Peyton (San Andreas) and the team of screenwriters struggle with the issue, but come close enough to succeeding through enough of the film to make it satisfying to fans.


As the movie opens, Athena-1, a research space station owned by gene manipulation company Energyne, is destroyed after a lab rat mutates and wreaks havoc. A crew member is ordered to retrieve research canisters containing a pathogen.. Sadly, the escape pod disintegrates upon reentry, killing the crew member and leaving a trail of debris across the United States, including the Everglades, where a canister is consumed by an American Crocodile, and a forest in Wyoming, where a gray wolf is exposed to the pathogen.

Meanwhile, in San Diego, we meet Davis Okoye (Dwayne Johnson), a former US Army Special Forces soldier and member of an anti-poaching unit, is a primatologist in a wildlife preserve, where he has formed a bond with an albino gorilla named George. canisters crash lands in George's habitat. George is exposed to the pathogen when he checks it out. George grows considerably larger and aggressive overnight, and Davis is contacted by Dr. Kate Caldwell (Naomie Harris), a genetic engineer who explains the origin of the pathogen.

Before long, the government gets involved, and this being a movie, government + big business + science equals all hell breaking loose.

It goes without saying that the effects and action are where the film's strengths lie, but the storyline, while utterly ridiculous and spurious, fits nicely with the spirit and tone of the game, and Dwayne Johnson continues to work as the Schwarzenegger of his day. What doesn't work at all is the duo of villains responsible for this bioengineering disaster, played by Malin Ackerman and Jake Lacey (Plop from The Office.) To call Ackerman (Watchmen, Rock of Ages, The Proposal) an actress with very limited abilities would actually be quite kind, and Lacey is beyond awkward, giving an overly mannered performance that strips him of all of his natural charm and credibility. To place the blame entirely on the actors would not be fair, as they have been given horribly written characters and are forced to spout the worst dialogue in a movie that tends to get more mileage out of a gorilla making obscene gestures than it does out of anyone talking. and Peyton directs them almost as if they in a different movie from the one Johnson is in. But at the same Jeffrey Dean Morgan as the swaggering cowboy government agent is given plenty of insipid dialogue and a laughable accent, but not only pulls it off, he actually makes you admire him all the more as an actor for his ability to make it work, so you can blame some of it on the actors themselves. As for Naomie Harris, anyone who didn't know going into this knowing that she would be largely wasted didn't know that she was in the film at all.

But the action and the effects really do rock, no pun intended, and there is a hugeness about this movie that is really thrilling. Whatever his other shortcomings, Peyton really knows how to take his audience on a wild ride and his movies tend to put you right into the action. And George is charismatic enough to carry the film on his massive shoulders, with strong support from his massive co-stars.

There's no denying that movie does what it's setting out to do in spectacular fashion, even if it does so by keeping it's aim rather low. It's a popcorn crowd pleaser that does right by its source material and delivers plenty of bang for your buck. Nobody is going to this to see a great story filled with deep characters. That doesn't completely excuse the areas where Rampage fails, but it does render them largely irrelevant in terms of a recommendation. This movie is what it is, and you likely already know going in if that is going to be enough for you or not. Let's just hope when the sequel comes around they do a better job with the characters.