Movie Review: "A Quiet Place" Is Worth Making Some Noise About (MILD SPOILERS) 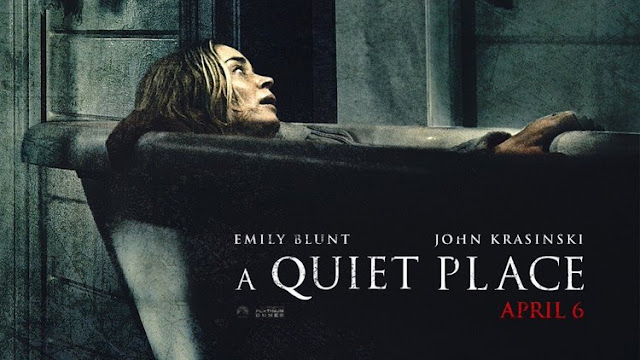 To start off with an irrelevant tangent (because I love a good irrelevant tangent), I'm a big fan of finding silly, obscure connections in movies. I'm also a big Jack Ryan fan, the following are some bits of trivia that amuse me:

Alec Baldwin and the fourth Jack, Chris Pine, voiced Santa Claus and Jack Frost in Rise of the Guardians.

Wonder Woman seems to have a Jack Ryan fixation (you can figure that one out for yourself.).

Jason Bourne (Matt Damon) also has one, having co-written films with Ben Affleck and the fifth (wow, there have really been five?) Ryan, John Krasinski.

And finally, and where this irrelevant tangent becomes a drawn out and labored segue is that Matt Damon's pair of Jacks have  now both officially established themselves extraordinarily talented directors. Krasinski, who previously directed the little known or cared about films Brief Interviews with Hideous Men and The Hollars, has over delivered on his promise to such a huge extent with A Quiet Place that his star power behind the camera may overshadow his stardom in front of the camera before he even debuts as Ryan, and every major studio is likely to start courting him, which may mean we get a sixth Jack sooner than anyone expected (I promise to stop now.).

In the year 2020, Earth has been overrun by sightless, predatory creatures with extremely sensitive hearing (who seemingly use echolocation to hunt humans and other prey). As the film opens, we meet the Abbott family as they scavenge the local town for supplies, remaining as silent as possible and communicating solely through sign language. Lee (Krasinski) tries to be very clear to the children that making noise, even a little noise, can get them killed, but when the youngest son plays with a toy space shuttle, disaster and unimaginable tragedy strike.

The film picks up again a little over a year later. Evelyn (Emily Blunt) is pregnant, and the family is doing their best to move on with their lives and stay quiet. But even if they could talk, communication in the family is down since the loss of Beau, especially between Lee and his daughter Regan (Millicent Simmonds), who gave her little brother the ill fated toy. Regan is also deaf, which causes her parents (especially Lee) to limit her activities more than they do for her brother Marcus (Noah Jupe) for fear that she may causes noises without knowing it.

The film, which features very minimal dialogue and even avoids subtitles for the sign language when it can, nevertheless owes a lot to a fiercely intelligent and well crafted script, and to the casting, as Krasinski is one of the most expressive actors out there when it comes to facial expression and body language (there's a reason why his bits looking at the camera on The Office became so beloved), and Blunt is merely the right role away from an Oscar. Jupe is wonderfully and at times painfully expressive, and the kids are so believable in their roles that I found myself wanting to jump through the screen and hug them both. The family dynamic is 100 percent convincing (and of course the real life husband and wife playing the leads no doubt helps.).

Krasinski the director wears his Spielbergian influence on his sleeve, having sighted Jaws as a big influence, and his skill and deliberate hand also invoke Hitchcock. Some have made comparisons to M. Night Shyamalan, and I can certainly see where the story plays that way, but the difference here is that is holds together in a way that even his best films (using the plural these is being excessively generous as it implies he's made more than one with redeeming qualities) never were able to do.
The atmosphere and tension are so palpable at all times (heightened by an excellent score by Marco Beltrami) that it is nearly impossible not to get pulled in, and speaking as someone who hasn't truly been scared by a horror movie in more than 20 years, I jumped in my seat so many times I lost count, and it took me nearly half an hour after the movie to feel comfortable talking aloud. The movie is deeper, more thoughtful and more poignant than I ever expected from anything that features Michael Bay's name. Bay produced the movie, having worked with Krasinski on 13 Hours and the upcoming Jack Ryan (and incidentally Alec Baldwin and Ben Affleck appeared together in Pearl Harbor . . . sorry,  my bad. Well, Bay, Baldwin and Affleck's bad, really.)  I am not a fan of Bay's work, and have not been crazy about Krasinski's association with him, but if it lead to having the chance to direct this film, there's not much I can say against it. It does amuse me to no end that when you look up Steven Spielberg's career on Rotten Tomatoes, his worst reviewed film is directed by Michael Bay, and now if you look up Bay, by far his best reviewed film is directed by John Krasinksi.

Fair warning should be made that this is really a film about the fear a parent faces and the all consuming responsibility and obsession that is keeping your little ones safe from harm, and especially if you have little ones, this may simply be too intense and upsetting, despite the restrained and tasteful approach (this is a scary movie that never has to rely on gore to make you jump, the point that it leaves it out almost entirely.).  It not only effected me as an uncle of some wonderful little kids, but possibly even more so as the child of tenacious parents who sacrificed a lot to keep me alive when I was a child born with a disease that should have killed me. Krasinski describes the film as love letter to his two daughters, and while it may be a very morbid one, the undeniable depth of that feeling of love and a family bond that cannot be broken is above all else what makes A Quiet Place a modern classic, and the best film I've seen so far this year.