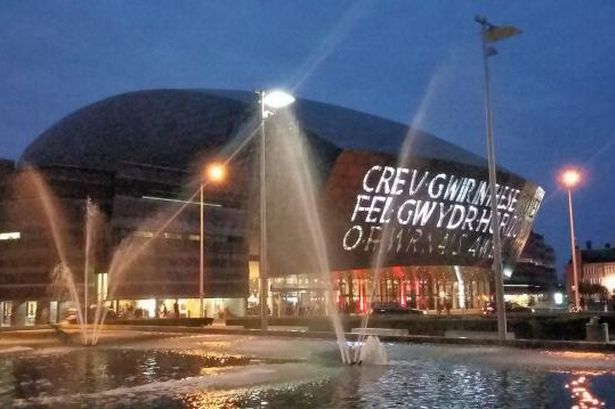 The Bearded Trio can exclusively reveal that Cardiff Bay in South Wales, UK will be used as a location for Star Wars Episode IX.  A source has contacted the site and revealed that at least one site located in the bay will be used for a "primary set" in the movie.  Location scouts apparently have found what they described as the ideal location for one scene with a possibility of an extra scene being used at another location.  The second location is yet to be confirmed.

Our sources cannot confirm the specific location in Cardiff Bay but speculation that the Millennium Centre may be the site Lucasfilm are looking at.  A leaked document that our source was able to get hold of showed a plan for the famous letters on the front of the building being changed to celebrate the movie studios coming to Wales.  The words "May the Force be with you" apparently will be lit up on the front of the building in Welsh.

This will not be the first time that Cardiff Bay has been used for a popular franchise as fans of Torchwood will know that the series centered around the bay with the base being located in the centre.  A shrine to 'Ianto' who was a popular character in the series can still be seen on the waterfront.  The BBC Wales studios have used Cardiff and the surrounding areas for a number of high profile TV shows such as Doctor Who, Merlin and Sherlock.  The new Jurassic World movie, Fallen Kingdom recently shot some scenes in the Brecon Beacons.

Our source tells us that the Welsh Assembly are fully behind the movie studio filming in South Wales.  This is a result of a recent campaign to attract not just movie but TV studios to use Wales as a location for filming.  Northern Ireland has seen tourism increase due to Game of Thrones being filmed at various locations in the country and Ireland already see a huge benefit with Star Wars.  Skellig Island being a popular location and a fan favourite.  The Welsh Assembly want to see the same benefits and rumours are they have subsidised a percentage of the filming costs.

As previously mentioned the second location is still open to speculation but a rumour is that a Welsh valley may be on the cards as recently location scouts were seen taking photographs at "Newyddion Ffug" located between Blaenavon and Abergavenny which is approximately 15 miles from Cardiff.

We will keep you updated on this breaking news.  Lets hope it's not raining when they're filming.