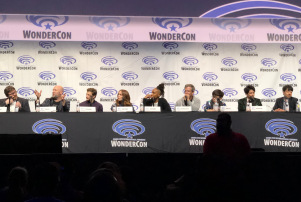 An interesting story was told by screenwriter Zak Penn.  He remembers when George Lucas showed up on set and gave Spielberg a hard time for shooting on digital.  Zak said it was like watching two 10-year-old friends arguing.

Also paying a visit to the set was Tom Cruise remembered by Olivia Cooke who embarrassingly recalls "that she blacked out, but that she was told that she bowed as though he were royalty."

Tye Sheridan praised Steven Spielberg and said he’s a child — he’s a film nerd...That’s why there’s so much camaraderie among all characters.”