THE POST ARRIVES ON DIGITAL APRIL 3 AND 4K ULTRA HD™, BLU-RAY™ AND DVD ON APRIL 17 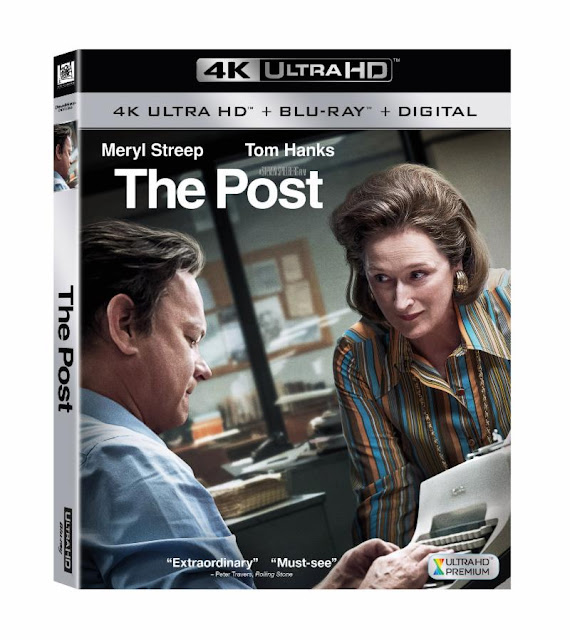 The Post will arrive on BLu-Ray and DVD on April 3rd.  That's another one to add to your Spielberg collection.

OSCAR ® winners Steven Spielberg, Meryl Streep, and Tom Hanks team up for the first time in this thrilling film based on a true story. Determined to uphold the nation's civil liberties, Katharine Graham (Streep), publisher of The Washinton Post, and hard-nosed editor Ben Bradlee (Hanks) join forces to expose a decades-long cover-up. But the two must risk their careers -- and their freedom -- to bring truth to light in this powerful film with a celebrated cast.

THE POST is "extraordinary...must-see" film according to Peter Travers of Rolling Stone and the home entertainment release features 90 minutes of bonus content, depicting the real life events behind the groundbreaking untold story and the journey to bring it to the big screen.

Add THE POST to your digital collection on Movies Anywhere™ beginning April 3 and enjoy the ultimate home viewing experience on 4K Ultra HD™,
Blu-ray™ and DVD on April 17.

THE POST Special Features:
Take in these fascinating documentaries about this riveting, important film and the incredible real-life story it’s based on, featuring director Steven Spielberg, stars Meryl Streep and Tom Hanks, reporters and others. Included are insightful interviews, documents from the Pentagon Papers era, and exclusive behind-the-scenes footage.

• Layout: Katharine Graham, Ben Bradlee & The Washington Post––**Blu-rayTM only
- Get to know the brave real-life characters at the heart of this story, Kay Graham and Ben Bradlee, who risked everything to tell the truth.
• Editorial: The Cast and Characters of The Post––**Blu-rayTM only
- Learn how, once Steven Spielberg, Meryl Streep and Tom Hanks agreed to make this important film, other world-class actors also signed on!
• The Style Section: Re-Creating an Era
- Visit the 1970s and the Washington Post newsroom in this engaging exploration of how the style of The Pentagon Papers era was created.
• Stop the Presses: Filming The Post
- You’re invited onto the set with Steven Spielberg, his collaborators and his cast as they meticulously craft each cinematic moment.
• Arts and Entertainment: Music for The Post
- Steven Spielberg and composer John Williams celebrate their 44-year partnership in this moving tribute to collaboration and friendship.