Review - Is 'Surviving Mars' The Sim City Of The Future?

Have you ever thought you could do a better job than Elon Musk?  Do you wish you had your own space agency like SpaceX?  How about having millions of dollars at your disposal and a vision of getting to Mars?  Well, Surviving Mars may just satisfy your urge to get to the red planet.

Surviving Mars is a construction and management game for PC, Xbox One and PS4 that sees you launching a mission to Mars with the ultimate intention of getting people up to the red planet and self-sustained.  The game looks gorgeous and is an extremely polished game.  Well, that’s no surprise as it’s brought to us by Haemimont Games and those clever people brought us the Tropico series.

You start out with decisions to make.  Mission Sponsors will govern your starting budget and what perks you receive.  Choose International Mars Mission as your sponsor and you will start with a bucket load of money but choose SpaceY and you have less money but get an extra rocket to launch supplies.  SpaceY obviously being the SpaceX option in the game.  Then you decide what goes in the first rocket to Mars.  Obviously manned missions to Mars will be preceded by a number of un-manned missions to get all the equipment up there first and that’s exactly what you do in Surviving Mars.  You select a suitable landing site.  This is no easy task.  You need minerals, metals and water if you can find some but you have to weigh this up against the risks of meteors and sand storms.

Once you’ve landed your first rocket, for the first hour you will be controlling little drones to build concrete factories, solar panels and pipes that run from here to there.  You can send more rockets from Earth to your site at a cost, eating into your budget.  You have a limited amount of rockets too so eventually you will need fuel refineries to get those babies back to Earth. 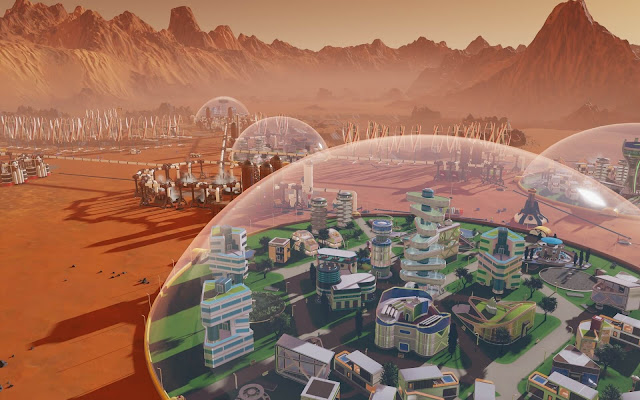 Once you’ve got materials, resources, power and water you can start to think about a dome.  You know the kind you see in science fiction artwork where buildings, gardens and a whole eco-system exists amongst a hostile environment.  You will need to decide what goes in your first dome.  Security, hospitals, grocers and a space bar maybe?  It’s all up to you.  Once you’ve got the structures in place then it’s the big step of sending humans up there.  Once they arrive the first goal is to get them to survive for ten sols.  A sol is a day on Mars.  You even have the task of deciding what kind of people you want to send up there?  Engineers, geologists or, if you want to go a little crazy and just send a rocket full of comic book geeks up there.  The choice is yours.

The game plays out like Sim City or Cities Skylines.  It’s one of those games that once you start playing and know what you’re doing then hours will pass without you realising it.  You can always tell a good game when you look to your side and see that cup of tea has gone cold.

But there is a warning with Surviving Mars and that’s the steep learning curve.  The game has no tutorial to speak of.  There are a few tips that appear at the top of the screen but that’s all you get.  The game can be a little daunting at first, after all, living on Mars is not easy.  How do I get water and keep it safe?  How do I make sure power is available in the night when all you got are solar panels?  These, I guarantee are questions you will be asking when you play Surviving Mars.  I strongly recommend like I did, watching a few “let’s play” videos on YouTube before you start playing.  Geekism is a good place to start and we've included one of his tutorial videos at the end of this review.

Another tip is, however tempting it may be, don’t start your first game with the International Mars Mission sponsor as previously mentioned.  You get way too much money and can spoil the challenge of the game.  That’s another thing I want to add about the game, replayability.  Is it there?  A lot of the times with these style of games, once you’ve built a huge base or city then you feel there’s no more to get from the game.  Well Surviving Mars has got around that with the “mystery” option.  These do exactly what it says on the tin, add a mystery to the game.  “The Power of Three” for instance is a reference to that Doctor Who episode where mysterious black cubes started appearing all over the globe.  I’m not going to tell you what happens but thanks to this clever option in the game you will be coming back to the game. 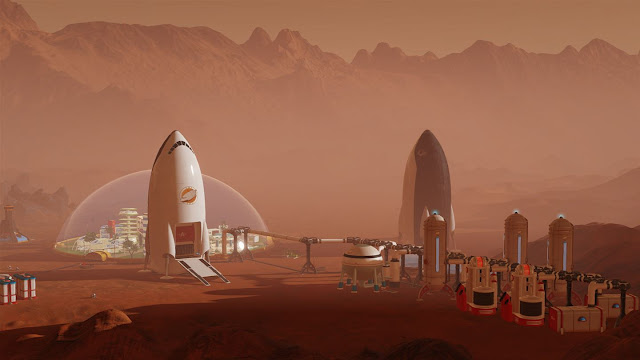 I love Surviving Mars.  The graphics are crisp and clean.  The animation of each structure, probe and environment are sufficient.  The music in the game is atmospheric, although I switched this off and played the soundtrack to The Martian by Harry Gregson-Williams instead.  Obviously a perfect match. The game has plenty of scalable options.  I was playing the game on a laptop with an I7 processor and an Nvidia 950M and was able to put all the options up to high.  On a console you won’t need to worry about this, however I’m not sure how enjoyable this game would be with a controller.  It’s a game that I feel needs a mouse.

If you like these style of games then you will love Surviving Mars.  If you’re new to this genre then an hour of watching a few videos is recommended.  A proper tutorial in the game is needed but don’t let that put you off.  Get your ass to Mars.