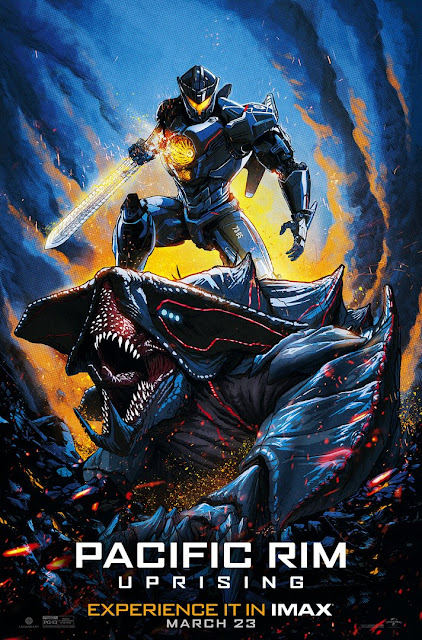 2013's Pacific Rim is one of those films that either really works for you or doesn't work at all, and it doesn't seem like there's a lot of in between. For the crowd that doesn't get it, it's important to point out that it came out in a summer made up of films ranging from so-so to terrible: Man of Steel, World War Z, After Earth and The Lone Ranger. Let's face it: even the most the most satisfying and well reviewed films like Star Trek Into Darkness and Iron Man 3 had some serious backlash (the latter due to the treatment of the Mandarin, and the former because, while it's far better than retcon suggests, it does suffer from some rather cheesy elements, an uneasy balancing act between homage and point-by-point retread of Wrath of Khan, and a Khan himself that is every bit as miscast as Kevin Costner's Robin Hood.). Not a one of these films was 100 % sure what they wanted to be.

So when a movie came along that was silly as can be but very aware of it and not pretending to me otherwise, was fast moving and full of eye popping visuals thanks to the man we can finally call Academy Award Winning Director Guillermo del Toro, it really hit the spot for a lot of us. For those on the opposite end of the spectrum who have trouble with the idea that the movie isn't universally beloved (I raise my hand here to indicate my inclusion in this group), you've got to remember that it is a silly movie about giant robotic machines fighting giant monsters: it has a lot of very loopy elements, wooden dialogue, and plotting that seems straight out of an after school cartoon. We space opera snobs tend to want to be able to derisively snort at the Fast and Furious crowd while  pretending that much of what we enjoy isn't just as dumb in it's own way (or in the case of Luc Besson films, even dumber.). Where where look at Pacific Rim and see a glorious celebration of a specific genre of B movie in the tradition of Raiders of the Lost Ark (and we are right, doggone it), it's inevitable and understandable that many other people just see something big and ridiculous (and they are . . .well, they're not wrong.).

Ten years after the Battle of the Breach, we are introduced to Jake Pentecost (John Boyega), son of the legendary Stacker Pentecost, the man who cancelled to Apocalypse.  A once-promising Jaeger pilot himself, Jake has since abandoned his training only to become caught up in a criminal underworld. But when Jake is arrested, he is given the old "Dirty Dozen" choice  by his adopted  sister, Mako Mori (Rinko Kikuchi)-who is leading a brave new generation of pilots that have grown up in the shadow of war. Jake is joined by gifted rival pilot Nate Lambert (Scott Eastwood) and 15-year-old Jaeger hacker Amara (Cailee Spaeny), and a rag tag group of wannage heroes. The group is also joined by scientist Newton Geissler (Charlie Day) and Hermann Gottlieb (Burn Gorman), the geniuses who drifted with the Kaiju brain to find a way to close the breach. Newton is now working for the Shao Corporation, led by Liwen Shao (Chinsese star Jing Tian, best known to Western audiences for The Great Wall and Kong: Skull Island) who is created an new army of drones to replace the Jaegers, reasoning that the limitations of finding drift compatible pilots are to two confining and that the drones will be more effective in another attack comes.

Director Steven S. DeKnight (creator of  the STARZ series Spartacus: Tits and Togas and showrunner for the excellent season two of Daredevil) does a very capable job with the action, even if he is unable to capture the the atmosphere that the Great Guilermo del Toro brought to the original), and delivers a solid, fun follow up, with the help of cinematographer Dan Mindel, who is know stranger to sci fi action  (Star Trek, John Carter,  Star Trek Into Darkness, The Force Awakens.). This film has a starkly different look as most of the action takes place during the day, as opposed to the stormy nights of the first film. The cast. led by Boyega, is game, even if they are all playing stock characters (Cailee Sapeny is enjoyable as a spunky young mechanical genius turned trainee Jaeger jock, but it's largely the same character that Isabella Moner played in Transformers: The Last Knight.). Scott Eastwood fares better than usual, genuinely coming across as comfortable and confident in front of the camera finally showing us a spark of being the son of Hollywood icon Kurt Russell (which is odd, because he's actually the son of Clint Eastwood.). Day, Gorman and Kikuchi add a lot to the proceedings, helping this feel like a sequel rather than a spin off, and Jing Tian is a welcome presence.

The movie isn't great by any means. It brings to mind Transformers more than once, and even has a few plot elements that may make you think of Independence Day: Resurgence, but thankfully it's a lot better than that makes it sound, so relax. DeKnight may not be Del Toro, but he's not Michael Bay, either: he keeps the story (silly and confusing as it is at times) relatively focused and the pacing tight, and the 111 minute run time keeps the chaos from waring out its welcome. The script is a bit jumbled and dumbed down (we have to hear multiple references to the Pacific Rim in order to clarify/justify the title) and it is full of plotholes (is drift compatibility hard to come by or isn't it?), and this onee feels more like a cartoon than the first movie. But it's a really fun cartoon, and I recommend bringing a bowl of your favorite Chocolate Frosted sugared cereal with you to the theater. If your expectations are all realistic, you should be satisfied with Pacific Rim: Uprising. It has no illusions about being more than it is, and while it could have aimed a bit higher, it does hit the mark.