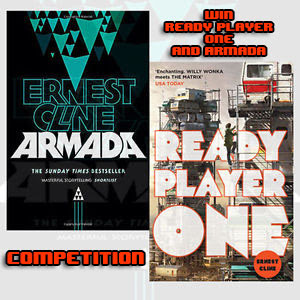 We're getting really excited here at The Bearded Trio.  It's only a matter of weeks until Ready Player One hits the big screen.  March 29th is the big day and to celebrate we're giving away not one but two books.  Of course it's Ready Player One we're giving away, the epic novel which Steven Spielberg has graced his directing magic on.  The second book is another classic by Ernest Cline and it's called Armada.  I',m currently three quarters through this one and loving every page.  If you like The Last Starfighter and your classic sci-fi references then you will love Armada.

To be in with a chance of winning the two books all you have to do is answer the following question:

"Greetings, Professor Falken." is a quote from which film?

A - The Last Starfighter
B - WarGames
C - WestWorld

All you have to do is answer the question above and post your answer either in the comments or on our Facebook page or Twitter page.

One lucky winner will win the two books in paperback form. We are making the competition available to everyone all over the world and one answer will get you entered. We will choose a lucky winner completely at random. The winner will be contacted for a mailing address and we will aim to get the books out within a few days of winning. We cannot substitute the prize and unfortunately we cannot be responsible for loss in the post. Closing date is Saturday 17th March, 4pm GMT.

About Armada
It’s just another day of high school for Zack Lightman. He's daydreaming through another boring math class, with just one more month to go until graduation and freedom—if he can make it that long without getting suspended again.

Then he glances out his classroom window and spots the flying saucer.

A minute later, he’s sure of it. Because the UFO he’s staring at is straight out of the videogame he plays every night, a hugely popular online flight simulator called Armada—in which gamers just happen to be protecting the earth from alien invaders.

But what Zack’s seeing is all too real. And his skills—as well as those of millions of gamers across the world—are going to be needed to save the earth from what’s about to befall it.

Yet even as he and his new comrades scramble to prepare for the alien onslaught, Zack can’t help thinking of all the science-fiction books, TV shows, and movies he grew up reading and watching, and wonder: Doesn’t something about this scenario seem a little too… familiar?

Armada is at once a rollicking, surprising thriller, a classic coming of age adventure, and an alien-invasion tale like nothing you’ve ever read before—one whose every page is infused with author Ernest Cline’s trademark pop-culture savvy.

About Ready Player One
In the year 2045, reality is an ugly place. The only time Wade Watts really feels alive is when he’s jacked into the OASIS, a vast virtual world where most of humanity spends their days.

When the eccentric creator of the OASIS dies, he leaves behind a series of fiendish puzzles, based on his obsession with the pop culture of decades past. Whoever is first to solve them will inherit his vast fortune – and control of the OASIS itself.

Then Wade cracks the first clue. Suddenly he’s beset by rivals who’ll kill to take this prize. The race is on – and the only way to survive is to win.