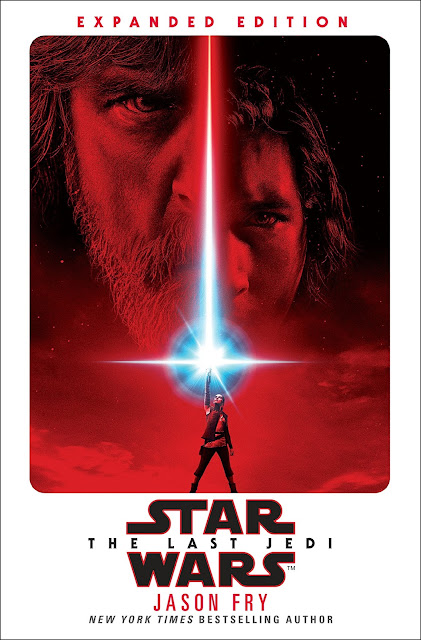 Star Wars: The Last Jedi
By Jason Fry
Based on the story and screenplay by Rian Johnson

I grew up on novelizations. As a dyslexic who struggled with reading , my love of movies and the ability to relive the story I again in detail gave me incentive to work harder at it. I could only afford to see most films in the theater once (and in some cases, not at all, as I remember reading the novelization of Willow long before seeing the the film in discount theaters.). There was a point where I felt the need to read the novelization of big every movie I really loved, though as I got into my mid teens I was finding my reading interests branching out more and more, and also finding that the quality of these movie tie ins was decreasing. They were still decent ways to relive the story, but little more than that. The best of the genre always left you feeling like you had an added insight into the story and gave you sequences and details that you couldn't get from the film. I believe that the more rushed, slapdash feel that was becoming more prevalent played a significant role in the genre dying out, though perhaps not as significant as swift video releases.

Rian Johnson also grew up on these books, and and such this was an important project to him. And and the book's release date, several months after the film, allows for a novel that much more in tune with the finished film than normal (the standard one being largely an author's interpretation of the screenplay, which often feels like the movie filtered through the novelist as an entirely different director to the reader, another director.).

Author Jason Fry has a very strong feel for Johnson's vision of the story, the characters and he achieves a wonderful fluidity while still added a great deal of new material, some of which can be scene in the deleted scenes on the upcoming Bluray. But more than anything, what Fry is able to capture that is so rare to the novelization is getting deep inside the head of the characters the way you would expect in a really good novel, and that vision is in perfect sync with Johnson's finished film, never clashing.

The book opens with a mesmerizing and thoughtful dream sequence where Luke Skywalker imagines a world where he'd never left Tattooine, and the Empire had never fallen. This bit alone is worth the price of the book, especially if you're a fan of the novelization of A New Hope.

The further we get into the story, the more closely it sticks to the film (which is pretty standard), but it's that sense of perspective that stays throughout that makes it feel like something different. The magic is in the details, from General Hux's musings on the similarities between the training of the First Order stormtroopers from childhood to the Jedi order in it's heyday, to a clearer feel than ever of Snoke and his plans for Ben Solo (don't expect to learn a ton of shocking new details about Snoke's past and origin. If anything, the book only adds to the film's controversial revelation that in the grand scheme of things, he was really nobody.). The fact that this feels much more complete and the universe it takes place in feels much more fully realized than Alan Dean Foster's novelization of The Force Awakens shouldn't reflect so much as a slight against that work as it is an acknowledgement that Fry had a lot more to work with, as did Johnson, who had Abrams work to build on and fleshed it out into something much more tangible.

The little moments of character interaction are really what makes this a must read, especially a sequence involving Chewie and Leia toward the end.  The late release may mean that it gets fewer readers, as the fervor has died down and the film is already available to own on digital. But if you have a passion for this story and it's characters, the chance to delve deeper into things is something you won't want to miss.

As a side note, if you've never experienced a Lucasfilm audiobook, do yourself a favor and try one. Complete with music and sound effects, they are much more elaborate experience than most, and actor Marc Thompson (who has read several of the major novels) is a treasure.