The Amazing Vision of Minority Report By Adam O'Brien 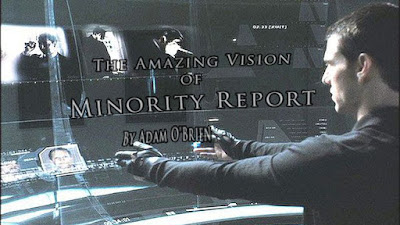 There are some truly breathtaking visions in cinema, and some that linger with us due to their vision. Blade Runner is my all time favourite film, let alone science fiction films. Next to it in the pantheon of Phillip K. Dick adaptations is Minority Report. To me it is one of Steven Spielberg's most amazing, and interesting films. So much thought went into the world building we see on screen.  It was also, at the time one of the many films that used the desaturated look in the cinematography, which truly works to give us both a beautiful and disturbing look into the future of law enforcement.

Years ago, in 1982 we got a film that gave us the template for overcrowded and famine torn cities, with run down buildings, with retro design, that of Blade Runner, from the mind of novelist Phillip K. Dick, and the visionary director Ridley Scott. Initially a box office failure, the film came back with a vengeance on VHS as a cult film and with the multiple versions found in theatres over the years.

It was cloned by a myriad of films, TV series, and books. The visions of Dick's work also adapted, Total Recall, Paycheck, many shorter stories and also Spielberg's Minority Report.

On the outset of the film, it looks like a Tom Cruise action adventure film. One has to think of the time the film was released in 2002. A year when Spielberg's own friend George Lucas released the second of his Star Wars prequels, and an action packed experienced is part of audience expectations.

However, the film only has that on the outside, this is a film that poses very unique questions, some that Frank Herbert also posed in Dune. It's all about future, predicted and how one can stop events from happening.

It's also happened in films like Back to the Future with things like the "grandfather paradox" where we see with the Almanac, a future of sorts that Marty could use to make a tidy profit.  However, someone else uses it and the entire plot of two sequels gobbles up the effects.

In Dick's story he has the elements of "precogs" who are people with precognition, knowing a limited amount of the future, and able to predict when evil will strike. They work alongside a group of detectives, the PreCrime units that then act on crime before it happens.

It's such an interesting power, and one the Jedi in Star Wars have, making them powerful as they see things play out how they imagined. In Dune, and Dune Messiah the lead character Paul Atreides is able to sense everything through his ability. These are superhuman, heroic traits that are used in these stories.

In Minority Report it's used to spectacular effect in the opening. We see the precogs in their environment viewing what seems to be a dream.  Again, this is a play on what is real, and what is not. What do you define as real? Are dreams reflective of our past? Perhaps they're elements of what we see in our future.

The precogs sense a crime about to happen in a suburban home, between an unfaithful wife, and her husband who walks in on the act. Without giving away the outcome, it's interesting to see that a crime never happens if prevented, and the effect it has on the possible victims.

The film has a detective film noir feel. Like that of Blade Runner it follows some of those beats, but also has a hero's journey for Tom Cruise which is how it plays out, and how he must face not only his fears of losing his son, and his marriage, and being stuck in the past. In some ways the prediction of futures is laid to waste as he, through his findings makes the future something one cannot plan. Thereby undoing the future as it stood.

The world is much more clean, and lived in, with a quality that seems plausible, more so than some of Dick's other visions. As also, is the use of new technologies, and how they improve the human condition and some that hinder. If you look at the likes of advertising in the future, the key that all adverts on walls of posters etc could key in on your own eye and pull all your details, and tailor that to you. A far more personal shopping experience, we also have the maglev cars, and the chase around it. I love these cars, as they kind of reminded me of the Tron light cycles for some reason, but the technology fascinates me and is truly plausible. The non lethal weapons used by the PreCrime unit are also wonderfully designed, the use of sonic weapons, sick sticks  and other deterrents in the film are interesting. The jet packs and hover transport also show an evolution from things like the patrol car.

What's even more interesting with the story is when Tom Cruise' character Chief John Anderton himself comes under the watch of the precogs, and is thought to be the one that commits a crime. What ensures is the corruption of a law enforcement practice, and showing that even the most well thought out technology, and plan can be thwarted, and abused.

We then see good old fashion police work uncover the real elements behind the story, and how the system is fallible. Anderton, like other heroes before conquers not only the immediate situation, around him, he finds the killer of his child, and the freedom for humanity from a form of control like PreCrime.

The end of the film is tense and the reveal is timed to perfection. It's the kind of ending you'd expect from a great detective tale, and one that is well played out.

Minority Report is well worth another watch, for its amazing visuals, thoughts of the future and cinematic adventure.