Movie Review: "Peter Rabbit" Is A Movie Fun To See With Your Kids, But It's No "Paddington" 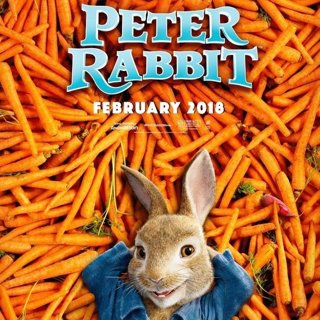 
The works of Beatrix Potter have been beloved for generations, and the backlash against putting them into a modern setting with a contemporary, "hip" sensibility have been loud and widespread. And it's not hard to understand why purists would feel that way, but it's always best to wait until one has actually seen a film before condemning it.

The titlular character is still getting into mischief in McGregor's garden, but in this version both of his parents, not just his father, have passed on to that great big bunny hop in the sky, and Peter as the eldest is left to care for his siblings. Peter's nemesis, the farmer MacGregor (played by the always delightful Sam Neil, sporting a gray and speaking with a Scottish brogue, bringing to mind  Alan Grant playing John Hammond)  dies of a heart attack, and his home is inherited by his great nephew, Thomas (Domnhall Gleeson. The younger MacGregor, who doesn't like the country or farm animals, plans to sell the place, but becomespecially taken with a neighbor named Bea (Rose Byrne), an artist who loves the local wildlife and is clearing meant to be a new personification of Beatrix Potter herself. Peter doesn't take kindly to this, being quote fond of Bea himself, and a war breaks out with man and rabbit trying to drive each other off of the land.

In order to enjoy this film, you have to be willing to accept that this is only one new and loose take on the story, not meant to be definitive and not capable of retroactively destroying anyone's childhood or making anyone roll over in the grave. In terms of tone and quality, it lands somewhere in between Paddington and Alvin and the Chipmunks, with too much of the humor feeling a bit lowbrow and with plenty of allusions to groins, buttocks and other things the kids seem to love (or at least Hollywood thinks they do) and the moments when it starts to feel like a return to the short lived Home Alone genre of the '90's made me want to back my head against the chair in front of me, but there's a fair amount of genuine whimsy and fun as well. Gleeson and Byrne are quite charming, and with lesser actors it may not have come together. Corden does a capable job as Peter, though Daisy Ridley and Margot Robbie as Cottontail and Flopsy, respectively, are even better, as is Colin Moody as cousin Benjamin.

There's an over reliance on pop songs, as director Will Gluck relies on the familiar crutch to set the mood and sell an album at the same time. But it all moves at a brisk pace and it's cute and often very easy to embrace.