Movie Review: "Annihilation" May Take Some Time To Digest 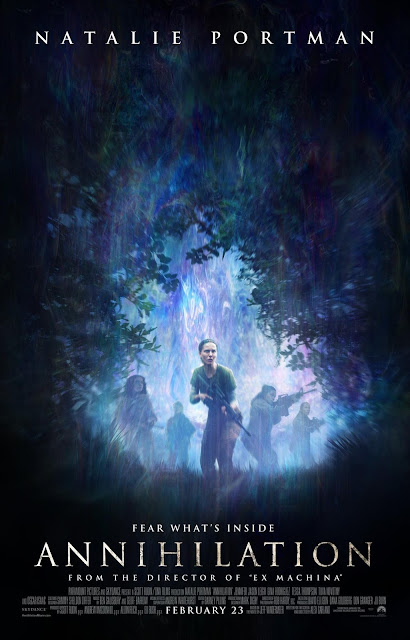 Despite the cerebral, Kubrickian, hard core science fiction feel of writer-director Alex Garland's brilliant thriller Ex Machina, it's hard not to go into a science fiction film called Annihilation that is marketed with images of people walking into the jungle with machine guns and not expect something more in the vein of Aliens than 2001: A Space Odyssey. Consequently, some audiences are going to be pretty unhappy with the cerebral, deep science and existential nature of this film, and that is understandable. But if you're prepared for something different and you don't mind a movie a movie being more than a little weird, there's a lot to be said for Garland's adaptation of the novel by Jeff VanderMeer.

The basic premise involves a group of soldiers entering an environmental disaster zone and only one soldier, (played by Oscar Isaac) coming out alive, and he has no explanations for what happened and is gravely injured. In an attempt to save his life, his wife Lena (played by Natalie Portman), a biologist and former military officer, volunteers for another expedition into the zone to figure out what happened to him. The team is made up entirely of women: Josie Radek (Tessa Thompson of Creed, Thor: Ragnarok),  Anya Thorenson (Jane the Virgin's Gina Rodriguez), Cass Shepherd Tuva Novotny of Eat Pray Love), and the mysterious Dr, Ventress (played by the mysterious Jennifer Jason Leigh.).

We've had at least three Alien rehashes in the past year alone, and this is a refreshing change of pace from those films, though to say it is totally without an element of that genre would be off base, and there is plenty of violence and graphic, disturbing gore. But this strangely mesmerising and deeply ponderous film has much higher aspirations.

Natalie Portman was a perfect piece of casting in the lead role of Lena, because the Star Wars prequels notwithstanding, as an actress, her technique and ability to express intense emotion are just sheer perfection, really, but she will always have this puzzlingly aloof quality, never quite letting us in to her mind. That worked very much in the favour of this story.  Though Isaac play a small role, he gives it his usual 100 percent, and Rodriquez and Thompson are both very effective (Rodriguez gets the sink your teeth into role as the token panic and anger prone member of the team.) . Leigh is as effectively cast an Portman, creating a character you are drawn to but want to keep your distance from at the same time.

This is not the kind of film that you walk out of of with an easy "I loved this" or "I hated it" opinion, or with ready explanations as to why. It's the kind that you have to mull over and digest, and we invoke the right to change our star rating later as the film fully processes for us. But a movie that not only requires you to think but makes you want to study the science involved more in depth is always a good thing. and Garland has really established himself as one of the most promising names in science fiction films in some time, up there with Denis Villeneuve and (depending on whether Mute is any good) Duncan Jones. His next project is definitely something to await with excitement.