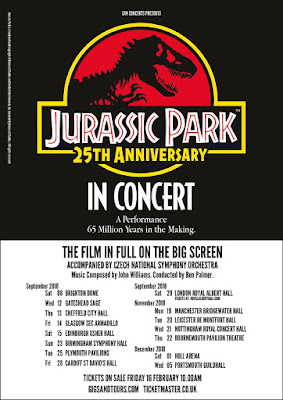 Live concerts with a full orchestra playing an epic soundtrack in time to a movie is definitely the in thing at the moment with Star Wars, Harry Potter, Indiana Jones and Jaws all getting their own tours.  Well, Jurassic Park which celebrates it's 25th anniversary this year is getting in on the act.  Clever girl.  A UK tour has just been announced and it kicks off in Brighton on September 8th and will tour all over the UK finishing at Portsmouth Guildhall on December 5th.

The John Williams soundtrack to Steven Spielberg's 1993 Dinosaur classic has some of the most memorable pieces from the composer such as one of my all time favourites, 'Journey to the Island.' This along with the full soundtrack will be expertly played by the Czech National Symphony Orchestra

Here are those live dates in full:


Tickets for Jurassic Park in Concert go on sale at 10:00 on Friday 16 February 2018 throughTicketmaster.co.uk.