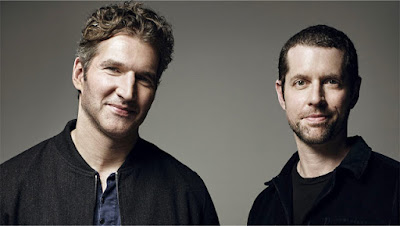 Who would like more Star Wars?  Well you are going to get it in the way of a brand new movie series.  That will be good news for Star Wars fans and Disney shareholders.

Over on the official Star Wars website it's just been announced that the creators of the hit Emmy award winning TV series, Game of Thrones, David Benioff and D.B. Weiss will be writing a new series of Star Wars films.  This will be in addition to the anthology movies and the Rian Johnson trilogy.

“David and Dan are some of the best storytellers working today,” said Kathleen Kennedy, president of Lucasfilm. “Their command of complex characters, depth of story and richness of mythology will break new ground and boldly push Star Wars in ways I find incredibly exciting.”

“In the summer of 1977 we traveled to a galaxy far, far away, and we’ve been dreaming of it ever since,” Benioff and Weiss said in a joint statement. “We are honored by the opportunity, a little terrified by the responsibility, and so excited to get started as soon as the final season of Game of Thrones is complete.”

What do you think of this news?  Good for Star Wars or is this the start of too much is a bad thing?  Let me know in the comments.

We will keep you up to date on this breaking news.