Fan interview with Aussie Fan And Co-Host Of My Saga, Blair Hiscock 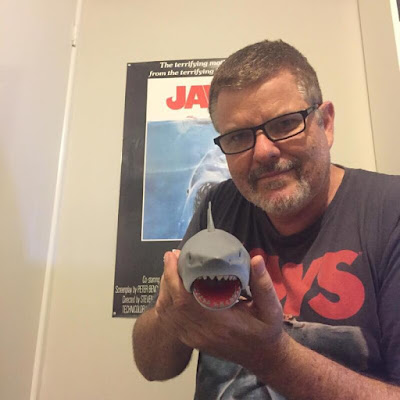 Adam O'Brien interviews Blair Hiscock of My Saga and talk about one of his favourite films, Jaws:

AB - Joining me today is a good friend and fellow Jaws fan, Blair Hiscock. Blair is a cinema lover who has followed not only Spielberg's work over the years but also George Lucas and John Williams. He's the co host of the Star Wars podcast My Saga, and also has a YouTube channel called Pop's Culture.

He joins me today, to chat about his affinity for the film and what he loves about it.
AB - Hi Blair, welcome to The Bearded Trio.
BH - Thanks Adam, Excited to be here to talk about my favourite Steven Spielberg film
AB - First off, what was your first experience like seeing Jaws?
BH - Well I am old enough to remember all the massive hype that came along with the release of the original movie. I was around nine I think when it first hit our shores here in Australia. From such an early age I was obsessed with this film. However being at such a tender age, there was no way that my parents would take me to see it. Some of their friends had seen it and their descriptions of certain “Gory” moments from the film coupled with my parent’s own apprehensions prevented me from seeing it on its original Cinema run in 75. I did however manage to get the John William’s legendary soundtrack which I played to death driving everyone crazy.
It wasn’t until about 5 years later when local TV first broadcast the film that I got to finally experience it. I say experience because one does not simply watch Jaws.
I remember being transfixed completely and literally being taken on an exciting, scary and sometimes funny rollercoaster ride. The movie is everything you could ever want. It was better than I ever imagined.
AB - What was it that stood out as the main draw for you?
BH - Well for starters Roger Kastel’s iconic Poster art is incredible and really gets under your skin. For me though it comes down to the chemistry between the characters, and the main 3 protagonists have it in spades. What initially appears as a B grade “hunt the monster” flick becomes so much more, a unique observation of male bonding and the human condition if you will.
AB - There's so many wonderful actors in Jaws. Who was your favourite?
BH - Wow! yes this film is awash with an embarrassment of talent. It’s hard for me to choose. Robert Shaw’s portrayal as Quint! is probably the standout, it really is his journey, a modern version of the Captain Ahab quest whose obsession with catching the Shark becomes all encompassing. I love both Brody and Hooper as well. Both Roy Scheider and Richard Dreyfuss own their characters and the three combined are a joy to watch.
AB - The shark is the iconic scary element, what is the best scene with it?
BH - For me the most effective scenes are the ones where we don’t see the actual shark. We know it’s there just lurking under the surface and the menace is palatable. The scene with the Barrels is just cinema at its finest, a genius mix of editing and music. The stories of the film’s troubled production are legendary and it still amazes me to this day the ingenuity applied to create such classic and thrilling sequences.

AB - There's some memorabilia around. Do you have any Jaws stuff?
BH - Yes I have an original 1975 Australian Jaws one sheet poster filed away. You can’t be a Jaws fan and not own the poster. I also still have that original soundtrack album from my youth and I recently picked up the “ReAction Jaws figure” which is the first collectable I have seen that looks like the actual Shark from the film.
AB - There's three sequels, which of them did you enjoy?
BH - Nothing can touch the original film it stands apart!. I did however find some entertainment value in “Jaws 2”, which was one of the first numbered sequel movies in any franchise. Who could forget the poster’s tag line “Just when you thought it was safe to go back in the water”. I enjoyed seeing the Brodie family again and Jaws ate a Helicopter! , that was cool.
AB - If you could direct a Jaws reboot what would it be about?
BH - Hmmm, I’d like to see one where the Shark gets smart and goes rampant in a secret government research facility gnawing on scientists starring Samuel L Jackson. Oh yeah they’ve done that one haven’t they? Haha.
Seriously though, the original Jaws should never be touched or disrespected with a remake. It is a major piece of Cinema history where the focus and direction of movies and their marketing was irrevocably changed forever. The film was lightning in a bottle, The films production’s problems forced Spielberg and his team to dream up clever and imaginative ways to pull it off.
The characters jump off the screen and each of their journeys are so engaging. John William’s iconic score is part of the vernacular. To even attempt to remake the original would be in my mind an epic travesty. So “Here’s to swimming with Bow legged women!”
AB - Thanks Blair for joining us today.

You can check out My Saga here and Blair's Pop's Culture Youtube channel here.