Ready Player One Will Be In Cinemas A Day Early. Rating For Film Revealed 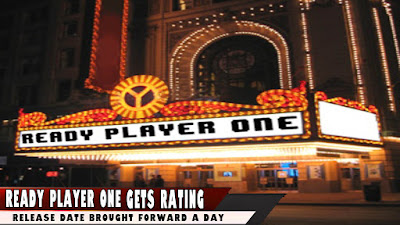 Ready Player One is set to hit cinemas a day earlier than anticipated.  Originally set for Good Friday, 30th March.  It is now going to hit the big screen on the Thursday 29th.  Of course this means some cinemas will do a preview showing on the Wednesday.


Spielberg's READY PLAYER ONE has changed its release date...to Thursday instead of Friday. Yep, just one day. Now officially opens 3/29, instead of 3/30. Which really means 3/28 for preview screenings.
— Exhibitor Relations (@ERCboxoffice) January 25, 2018

Also, it has been revealed that the movie has been rated as a PG-13 due some violent scenes, bloody images and 'some suggestive material.'  Having read the book I know there are some epic battle scenes and being in a world with limitless possibilities this is likely to be shown on screen to a certain extent with a huge amount of suggestiveness left up to the viewer.