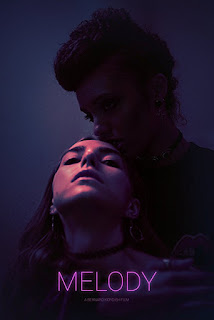 Early in the pre-release publicity for Star Wars: The Force Awakens, there was some discussion of an actress named Maisie Richardson-Sellers who had been chosen as part of the cast. Unfortunately, by the time the film was released her role as a trusted adviser to Princess Leia had be reduced to a non-speaking one in post-production. But those of us who have seen her in other roles (her most prominent is most likely her current gig as the superhero Vixen on DC's Legends of Tomorrow) know she is an engaging and exciting prescence. And in the new short film Melody, we see a soulful side of her that makes me hope to see much more of her in the future. We also see the emergence of a potentially major directing talent in Bernard Kordieh. 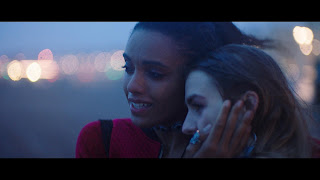 Melody is somewhat experimental short which is more about feel than plot. The story concerns a heartbroken young woman named  Leah (Maja Laskowska), her deep but somewhat ambiguous friendship with the more outgoing and seemingly confident Melody (Richardson-Sellers), and a night of clubbbing and other activitives to help Leahmove past painful experiences. Director Kordieh and cinematographer Samuel Pierce make this far more visually engaging than it might sound. In fact from a visual standpoint it's one of the most gorgeously assured short films I've ever seen, and I've far more than Icould begin to guess at over the years. The downside is that I was less pulled in by the characters and their lives than I hoped to be. Overall, I simply didn't find myself relating to Leah or caring much what happened to her (I don't think I was supposed to with the film's third significant character, Dudley O'Shaugnessy's Francesco, whose unlikable smarminess is probably intentional but makes me disagree with Melody when se says "I get what they see in you".). However, Richardson-Sellers is luminous in the title role, and her confrontation with Francesco toward the end is a strong piece of writing in addition to being very well acted by her.

The semi-experiment nature of the film gives it a lovely, almost dreamlike quality that left some aspects of the story surreal and ambiguous in my sense of its reallity in a way that I liked. I have questions about Melody herself that I'm not sure I want answered, because I kind of prefer the aritsitc ambiguity. While I had found the characters more compelling, I'm very impressed by director Kordeih's cinematic talent, and I hope see a lot more of him in the future, including helming a feature. Kordeih could be a major discovery. And of course, I very much hope Maisie Richardon-Sellers will continue to see her star rise and get more roles that showcase her remarkable presecence and talent.
The Bearded Trio - The Site For Steven Spielberg, George Lucas, John Williams and a whole lot more.
THE BEARDED TRIO ON FACEBOOK
THE BEARDED TRIO ON TWITTER
THE BEARDED TRIO ON GOOGLE+
THE BEARDED TRIO ON PINTEREST
CLICK HERE FOR FACTS ON STEVEN SPIELBERG
CLICK HERE FOR FACTS ON GEORGE LUCAS
CLICK HERE FOR FACTS ON JOHN WILLIAMS