Movie Review: "Hostiles" Is A Compelling Drama of Survival 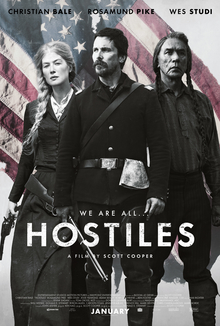 In 1892, Wesley Quaid and his family are attacked by a Comanche war party who proceed to murder and scalp him and kill his three children, but his wife Rosalie (Rosamund Pike) escapes capture in a thicket. 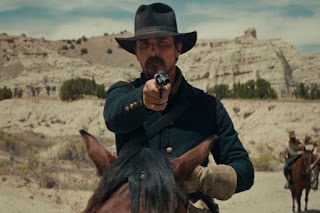 In Fort Berringer New Mexico, Captain Joseph Blocker Christian Bale) rounds up an escaping
Apache family and bring them to the fort. He is then called to the office of Colonel Abraham Biggs, who informs him of his new orders direct from the President: escort dying Cheyenne war chief Yellow Hawk (Wes Studi)and his family back to their tribal lands in Montana. He reluctantly accepts despite his history with the chief including the murders of several friends. He chooses a detail to accompany: Private "Frenchie" DeJardin, the youngest, Lieutenant Kidder, fresh from West Point, and old friends Master Sergeant Metz and Corporal Woodson, a Buffalo Soldier.

They begin their journey, but diverge from their path to investigate the charred Quaid house. Inside they find the emotionally scarred Rosalie, who after coaxing from Blocker, agrees to sleep in their camp, although she is initially hostile towards the Cheyenne family because of the previous attack. She buries her family the next day and joins them on their journey. They are soon ambushed by the Comanche party, who kill Frenchie and critically wound Woodson, although he survives. Quaid is again traumatized for a bit, but soon recovers.

The biggest thing Hostiles has going for is its cast, and they are quite a substantial asset. Bale showcases once again what a powerhouse actor he is, and this is one of his most layered and mature performances. Pike is also outstanding in an Oscar-bait role that could easily be overplayed, but Pike and director Scott Cooper resit the urge to ever let it become so. And while Wes Studi isn't given quite as much to do as we hoped, it's great to see this excellent actor given even a small chance to shine, as too often in the years since his breakout performances in The Last of the Mohicans and Geromino: An American Legend, he's been relegated to roles unworthy of his massive talent.

Cooper (Crazy Heart, Black Mass) has crafted a film that moves at a slow pace, developing compelling characters and situations. Unfortunately it has a tendency to meander at times, and the commitment to feeling authentic is both the film's greatest strength and biggest weakness. it's more true to life than a film like The Revenant, but it's not nearly as gripping or satisfying. When all is said and done, Hostiles is a very good film, but there is a feeling that it was only a script draft or two away from being a great one, and that's shame. Still, it's well worth the price of admission, especially for history and genre buffs.