Movie Review: Bruckheimer Goes Back To Propaganda With The Problematic "12 Strong" 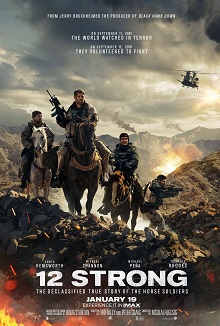 For some reason, January has become "hug a Republican" month in Hollywood, with a one major release per year aimed at the American Sniper or Lone Survivor crowd, you know who I mean, the people that deeply resents you because you don't have an American flag on your garbage can, or "Support the Troops" or "Shoot A Duck For Jesus" bumper stickers on the truck you don't own. This year's entry comes from Hollywood mega-producer and Jerry Bruckheimer, who used to specialize in macho military recruiting films back in the pre-Johnny Depp phase of his career.  But this is his first major foray into the genre post 9/11 (Blackhawk Down was made before the attacks), and it's very different world we live in today.

12 Strong tells the "declassified" story of Task Force Dagger, a group made up of CIA paramilitary
officers and US Army Green Berets who were sent to Afghanistan, where they joined forces with General Abdul Rashid Dostum of the Northern Alliance to help the fight against Taliban forces, who of course were brought to power in 1988 by Ronald Reagan and John Rambo.  Chris Hemsworth stars as Captain Mitch Nelson, the team leader, who has just transferred to a desk job but immediately pushes for a return to active duty after terrorists (spoiler alert) crash two airplanes into the World Trade Center. Mitch's unit is the first team sent in, in literally the first military response to the attack, a covert operation attempting to cut off the Taliban’s supply line.

Hemsworth carries the film very capably, though his character is woefully underwritten. In fact, all of the characters are underwritten, hardly displaying an particular character or personality traits other then determination to get some payback for what happened on that infamous day. And the portrayal of the Taliban villains is as one-dimensional as the Nazis in any old school World War II movie. I'm not asking for them to be portrayed positively in any way, just something a little more nuanced than the snarling woman killers dressed in black we see here. That's not entirely unwarranted or hard to understand: the Taliban are definitely worthy movie villains who committed over the top atrocities. But it's the lack of distinction that's troubling: as nice as it is to say that the audiences intelligence needs to be respected, America lost it's right to be trusted with that when it comes to the portrayal of Muslims, and as much as the vastness of the religion and middle ground between "Talilban" and "travel ban" when it comes to characterizing them may seem outside of the purview of the story, in this day and age making a movie with cardboard middle eastern villains is more than just problematic, it's irresponsible.

The major failing of the film is in its lack of subtlety and nuance, which is a shame because director Nikolai Fuglsig keeps his staging and pacing nice and fluid most of the way, creating a film.that engaged us and held our attention much more than we frankly expected. He handles his action scenes very well, and he's got a strong cast and works well with them. But the script (and the producers) ask a lot of an audience in hoping they can just ignore 16 years of context on the war in Afghanistan and get into a rah-rah adventure movie that portrays American know-how and determination leading to a stunning victory, and only has one short and excessively on the nose monologue to touch on the complex, drawn out conflict that that would follow it.

12 Strong is actually a fairly good adventure movie if you can suspend deeper thought long enough to enjoy the Afghan war portrayed as one. But a deeper, more thoughtful film that portrayed the soldiers as multi-dimensional humans instead of just macho heroes would have been more compelling and, ultimately, more respectful.