Why We Love The Answer To Rey's Heritage (SPOILER WARNING)

WARNING: This article contains spoilers about Star Wars: The Last Jedi. If you haven't seen this film, you probably don't want to read this. 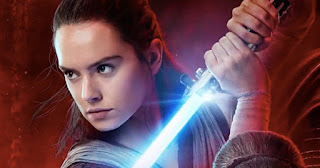 "Nothing counts so much as blood." This line was spoken by Gene Hackman in Lawrence Kasdan's 1994 western Wyatt Earp, as he tried to teach his family to stay together, but it could have easily appled to pretty much any fantasy story you can name.

"Yer a wizard, Harry, and a thumpin' good one I'd wager, once yer trained up a bit, o' course."

Rubeus Hagrid speaks this line to Harry Potter, reckoning that as the only son of James and Lily Potter, it goes without saying that Harry must be great. Granted, he's also The Boy Who Lived, and J.K. Rowling has come right out and said that Neville Longbottom could have also fulfilled the prophecy about the boy who would defeat "He Who Must Not be Named". But the fact remains that he didn't. No, it was Harry, and the legacy of his parentage is brought up on at least every third page of all seven books. Game of Thrones seems to be all about whether you're a Stark or a Lannister, and in The Lord of the Rings, the heir of Elendil is the one true King who can unite Gondor and Arnor. Indeed, the themes of purity of blood recur with such frequency in Tolkien's masterpiece that accusations of varying degrees of racism have been made by a number of legitimate scholars.

And the there's the Skywalker family in Star Wars. The Force is strong with them, as we have seen again and again and again. The link between Force sensitivity and the Skywalker blood is such a staple of the films that it was a given to many fans that Rey (Daisy Ridley), the young scavenger introduced in The Force Awakens, simply must be a Skywalker. Or maybe a Kenobi. Yeah, that's it, a Kenobi! After all, the accent had to come from somewhere! Or maybe she's even descended from . . . Emperor Palpatine himself! So, there's a history of the Dark Side in her family that she has to overcome! But the important thing is that, obviously, she's SOMEBODY. 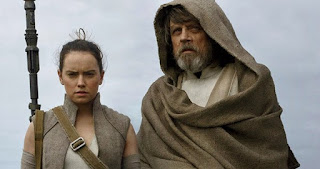 Last week, Rian Johnson's  The Last Jedi hit theaters, and we learned that Rey's parents were merely junk dealers who traded her for drinking money. The revelation was met with a lot of weeping, wailing, gnashing of teeth and any other negative reaction you can think of from hardcore Jedofiles on the internet, and to hear them tell it, The Last Jedi was is only the worst of the Star Wars films, it's practically a war crime.  How could Lucasfilm betray us all like that? Junk dealers? No! It's not true. It's impossible! Rey was supposed to be somebody.

So, our question is this: how is she not "somebody" now?

By breaking the cycle of the tired (and troublesome) tendency in fantasy to imply that greatness comes only through breeding, Johnson's film shot down the idea of a "Royal Family"of the Force, and as far as we are concerned, it couldn't have done so sooner. The message made by this bold choice, and by the beautiful ending of the film (wherein a slave child summons his broom to him using the Force) is that anyone can be anything. A person who comes from nothing can be the most powerful person in the galaxy if it is in their heart and their strength of will. It's about who you are, not where you come from. How is it that anyone actually feels cheated by this idea? Unless your father in law is the President of the United States, or your Dad is the Prince of Wales, or you are Stephen Baldwin, the idea that being special comes on the basis of your own merit should be a cause for tears of joy and an enthusiastic nod of approval, not whining. The image of the young child looking up at the stars, wielding his broom like a lightsaber, is a loving and downright reverent tribute to every kid for the past 40 years who ever dreamed of being like Luke Skywalker. That dream wasn't limited to the children of George Lucas, Mark Hamill or Carrie Fisher. It was a dream shared by J.J. Abrams, by Rian Johnson, by us, by you, and by every fan who has been condemning the film.

We realize that speculation and theorizing are fun, and everyone loves a good twist. But the twist we were given was unexpected and meaningful, and frankly, far less silly than "Oh, Luke and Leia? . . . they're . . . twins! Yeah, that's it!" (Not that we are putting down that plotline, but it was awfully convenient and it's important to note that it wasn't originally planned at all. Always in motion, the Force is.). It's time to widen the universe beyond the narrow scope of the idea that the Force belongs to the Skywalker family, or even to the Jedi. As Luke points out, the notion is an arrogant one, and it needed to be put to rest. At the same time, The Last Jedi shows us a Leia Organna (Skywalker) that is more powerful than we ever imagined. It hardly ruins anything we've come to cherish in the past. It pays homage to it and builds upon it, and it lets us dare to be part of it all. 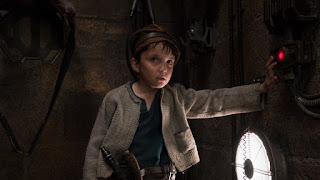 You can be disappointed if you want to. it's not the answer you wanted, and that's valid. You can rant about how the stories in the Legends books were much better, and you can actually still read them, because when Lucasfilm announced that they were not canon (we say not canon as opposed to no longer cannon, because we realized more than 20 years ago that that no matter how much fun they were, they were never meant to be canon), nobody actually came to your house and seized every copy of the books and burned them. You can still get them, and read them, and treasure them (as we do with copy of Heir to the Empire, signed by Timothy Zahn.) Personally, we feel that the novels did their part in helping to establish a rich extended universe, and gave us some fun characters, but honestly, story was never their strong point. We also feel that The Last Jedi is the best thing to come out of Lucasfilm since Indiana Jones and the Last Crusade, but we recognize that our opinion is just that: our opinion. If you prefer Jaina and Jacen to Rey and Ben, that's just fine, and you're not wrong. You're just not right, either. Read all about them and by all means enjoy them again and again, and as you do so, please let the rest of us (who gave the film its overwhelming A Cinemascore) watch the movie (that was lovingly made for all of us) in peace and quiet.

If you don't like the books either but simply hate the new film because you imagined something different, then have fun with your imagination! The greatest fan films are the ones in our heads, and we can constantly watch them and tweak them. Whatever you choose, we sincerely hope you have fun with it, but please, let our children and yours (and the many out there who don't know their parents) absorb the lesson that their ability to realize their dreams isn't dependent on whether we realized ours, or whether we have the ability to pull strings or pay for theirs. It's not about our triumphs or mistakes. It's about them staying true to themselves and holding tight to that broomstick, staring at the stars, and believing that the Force will be with them, always . . . whoever they may be.