The Bearded Trio Gift Idea #9 - Watch A Movie In Concert 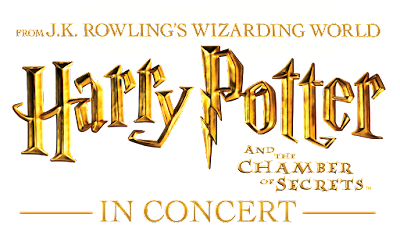 There's nothing like going to see a good movie and it's even better when it involves a good soundtrack being played live by a world class orchestra.  That's why our ninth idea for a Christmas gift is just that.

Last week I had the privilege to see Harry Potter and the Chamber of Secrets in Concert at the Motorpoint Arena in Cardiff thanks to CineConcerts.  The venue was packed full of Muggles and Harry Potter fans who were all being encouraged by the conductor to cheer when their favourite character appears on screen.  The atmosphere was wonderfully magic being surrounded by fellow Potter fans.

Before the show started a show reel was being played on John Williams and how he came to compose the music for the first three films in the Harry Potter series.  It felt right seeing the maestro himself on the big screen.

The whole movie is played with subtitles but the centre stage is the full orchestra who expertly play the John Williams score in time to the movie.  It's so good that you really can't tell the difference and feels like its just part of the movie.  The soundtracks to the Harry Potter movies are a perfect choice for a live orchestra to do a world tour for.

Justin Freer, President of CineConcerts and Producer/Conductor of The Harry Potter Film Concert Series explains, "The Harry Potter film series is a once-in-a-lifetime cultural phenomenon that continues to delight millions of fans around the world. It is with great pleasure that we introduce for the first time ever an opportunity to experience the award-winning music scores played live by a symphony orchestra, all while the beloved film is simultaneously projected onto the big screen. It will be an unforgettable event.”

Brady Beaubien of CineConcerts and Concert Producer for The Harry Potter Film Concert Series added, “Harry Potter is synonymous with excitement around the entire world and we hope that by performing this incredible music with the full movie, audiences will enjoy returning to this world, and to the many wonderful characters that inhabit it.”

It really is magical hearing a John Williams soundtrack being played live and hearing wonderful pieces such as Fawkes The Phoenix being played right in front of you by a full orchestra is something that everyone should experience.

CineConcerts did an outstanding job and I can't wait to see Harry Potter and the Prisoner of Azkiban next year.

You can find out more about the Harry Potter in Concert tour dates, photos and videos here.

Its not just Harry Potter that has received the concert treatment.  Jaws, Indiana Jones and Back to the Future are just a few that are currently doing the tours.  See here for more details.

Just a tip if you do order tickets for a movie in concert, make sure you get as close to the orchestra as possible.  I've noticed that the further away you are from the orchestra the more you watch the movie.  This sounds strange but I believe that you are there to witness the talents on stage and how they bring the magical scores to life.