Ready Player One Author Admits Sequel In The Works With Spielberg Input. 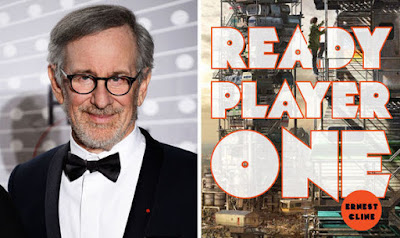 Ernest Cline, the author of Ready Player One which will also be a blockbuster movie next year directed by Steven Spielberg has talked about a sequel to the book and with added XP, it will have Steven Spielberg's input.

Cline talked about the sequel and Spielberg's input during a trailer launch event and understandably couldn't say much about it but the confirmation is welcome news.  Who doesn't want more retro 80's goodness in an action packed story?

He also admitted that Wade's diary which is featured in the first book was inspired from Spielberg's Indiana Jones and the Last Crusade.  Here's what he said when asked about a sequel:

“It is true...I can’t talk about it too much, but I can tell you there’s no better inspiration for a writer returning to a world they’ve already worked on when they’re seeing Steven Spielberg bringing that world to life. To get to talk to him and get his input, one of the greatest storytellers of all-time, and a storyteller that had a direct influence on my first novel, ‘Ready Player One.’ Wade carries a grail diary through the whole story to collect his clues about the Easter Egg hunt, and that’s because of ‘Indiana Jones and the Last Crusade.’ It would have been a different story if I had not grown up watching Steven’s movies. So to get to not only collaborate with him to bring the first story to life but to bounce ideas off of him for the sequel is the most gratifying thing that’s ever happened to me in my life.”