Movie Review: Spielberg Creates Another Classic With Timely "The Post" 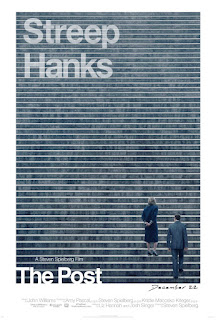 
I don't write for a Spielberg related site because i don't like his films, so it's no surprise for me to give his latest award-winning drama a rave. However, even coming from my favorite director, The Post is something special. Remarkably timely and yet also timeless, this is one of the best of Spielberg's new wave of actor/character related films, and it's my choice as the best and most important film of 2017. The superb ensemble cast is justifiably getting most of the accolades, but it's a mistake to think in any way that this isn't a director's film. Spielberg's gifts for pacing and storytelling fluidity have rarely been better used.

Meryl Streep gives a knockot performance as Katherine "Kay" Graham, the publisher of The Washington Post. In 1971, when the film is set, a female publisher was something that simply didn't happen, and indeed Graham only has the job because her father left the paper to her husband, who later committed suicide. Katharine is struggling to preserve her families legacy, while finding her footing with the tough as nails news editor, Ben Bradlee (Tom Hanks). Just as the paper is going public on the U.S stock exchange, The New York Times breaks the story of a study leaked from the Pentagon, detailing over 20 years of lies the White House has told the public about the troubled war in Vietnam. Bradlee, anxious to turn the Post into more than Washington D.C.'s local paper, itches to get involved with publishing what would come to be known as "The Pentagon Papers", but Katharine is more ambivalent, between the strong arm tactics of what was up to then the most vindictive White House in history, and her personal loyalty to former Secretary of Defense, Robert McNamara (Star Trek's Bruce Greenwood).

Spielberg has put together a cast to rival his Lincoln ensemble, and Hanks once again gives his collaborator an excellent performance, this time playing a character a bit pricklier than the all-American nice guy he played in Bridge of Spies. Among the supporting cast the standouts are Bob Odenkirk, who deserves Oscar consideration for his work as reporter Ben Bagdikyan, and Greenwood, who brings genuine humanity to one of the film's most difficult characters. And while underused, Sarah Paulson and Carrie Coon each get brief moments to show what exceptional talents they are. But of course we've saved the best for last: Meryl Streep reminds us all again why she is the least overrated actress in Hollywood history with a portrayal that will be remembered for decades to come. Her Katharine Graham is the film's most sympathetic character, and especially in the final third of the film, Streep shines as brightly as she ever has. Spielberg decisively answers critics who have charged that his films don't include strong enough roles for women by giving us a new feminist classic.

Spielberg's directorial approach is a mix of the actor-driven style of Lincoln and a return to 1970s cinematic techniques he employed in Munich, zoom lenses and all. Who else but Spielberg (okay, maybe Scorsese) could manage to make his visuals seem this understated and dazzling at the same time? Spielberg and his trusty cinematographer Janusz Kaminski are at the top of their respective games, and editor Michael Kahn (joined by Sarah Broshar, an assistant/"additional" editor on Bridge of Spies and The BFG) paces the film to turn a talky drama into a suspense thriller. And of course there's the John Williams score. While not particularly innovative, it hits all of the right notes emotionally and is a soundtrack fans will want to own.


At a time when the subjects of the U.S. executive branch undermining the constitutionally guaranteed freedom of the press has never been more relevant, The Post isn't just a great film, it's a deeply important one. One that reminds us that it iss the job of a journalist to prevent those in power from abusing it, and that a free society can't exist without a free press. Spielberg has made no secret of the fact that this is an overtly political film, made because "I hadn't said anything about Trump", and now he's said it loudly, passionately and eloquently, and the world needs to hear it.  Fortunately, as they listen they'll be thoroughly entertained by superb storytelling, flawless craftsmanship, and an abundance of great performances from a phenomenal cast. Steven Spielberg has made another classic, and one with a profoundly important message about news that's anything but fake.