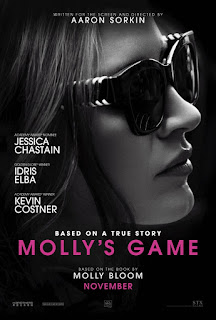 The story of Molly Bloom is a story about resilience in the face of obstacles. It's also a story about stubbornness, pride, fragile egos, scheming and money. In short, it has almost everything that writer Aaron Sorkin would need to create a film that fits his signature brand of very clever (sometimes too clever) dialogue and character study set against a colorful backdrop.

Bloom (playe here by Jessica Chastain) was charged in April of 2013 with running a high-stakes poker game that originated out of the Viper Room in Los Angeles and attracted wealthy individuals, sports figures and Hollywood celebrities, and just may have also attracted the attention of the Russian mob (Fake news! Sad.). Tobey Maguire was said to be instrumental in getting the game started, and other celebrities who were said to frequent the games included Leonadro DiCaprio, Ben Affleck, Alex Rodriguez and Macaulay Culkin.

But Bloom started off in a very different competitive atmosphere, that of Olympic moguls skiing.  The film chronicles her life altering accident at the Olympic Trials trials in Deer Valley, Utah. When her hopes at an Olympic career are dashed, she decides to go to law school, but in the meantime begins working as a personal assistant to a real estate agent named Dean Keith (Jeremy Strong), who introduces her to the world of underground high stakes poker. When Molly starts making a killing off of helping Keith run these games despite his tendency to lose, he tries to cut her out, and learns the hard way not to cross Molly Bloom, as the game quickly becomes hers with the assistance of a Hollywood star identified only as "Player X" in the film (the role is played by Michael Cera, which is easily the least believable part of the film as no one is going to buy Michael Cera as a movie star.).

Sorkin holds a lot of winning cards in his cast, especially the Queen (Chastain) and the King (Idris Elba in a terrific turn as Molly's lawyer), but his ace in the hole is Kevin Costner as Molly's psychologist father, Larry Bloom. This is Costner's best performance in a very long time, ranking among the strongest of his career, and he deserves to be getting serious Oscar buzz, and it's great to see him on screen with his Dances with Wolves discovery Graham Greene again, even if they are literally on opposite ends of a courtroom the entire time and never speak a word to each other. Still, as good as Costner is, it's important to recognize that having Chastain to play off of is an important part of that, and it's hard to overstate her ability to carry a film on her shoulders. She has lit the screen on fire with far less interesting characters than this one, and it's really a testament to what a great year it has been for women in leading roles that she is not likely to walk away with a gold statuette for her efforts.

The script is typical Sorkin, nothing more and nothing less. The fact that real life conversations are never nearly as vivid and structured as they are in a Sorkin script is always going to both his greatest strength and greatest weakness, but his verbal thrust and parry is often more entertaining than the best Yen Wo Ping choreography. Sorkin also struggles a little with convincing us why Ebla's character would want to take this case, and you may find yourself with some nagging questions the next day, but it all splays well enough.Molly's Game doesn't reach the level of greatness of Moneyball, but it is more than enough to please his many fans, and as first time directing effort, it's impressively skillful, even if the pacing lags a little on occasion.