Movie Review: "All The Money In The World" Is A First-Rate Thriller 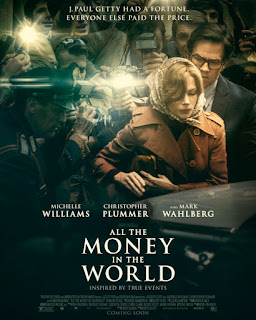 All The Money In The World

Ridley Scott's All The Money in The World is unique in the fact that its claim to fame is all about who who isn't in it: After two-time Academy Award winner Kevin Spacey was disgraced in a sexual assault/harassment scandal, Scott raced to replace him in the already quickly made film with screen great Christopher Plummer, with only nine weeks to go until the scheduled release. That he managed to do this at all is impressive enough; that Scott and Plummer both managed to do Oscar-quality work in the process speaks to why the two 80-something artists have managed to stay near the top of their respective fields for decades.

Plummer plays oil magnate J. Paul Getty, the original billionaire and one-time richest man in the world (in fact, at his time Getty was the richest man the world had ever seen, and he managed to do it without ever stooping to reality TV.)  However, Getty's vast fortune came at the expense of his personal relationships, including with his son, J. Paul Getty II (Andrew Buchan). When the adult Getty II is persuaded by his wife Gail (Michelle Williams) to ask his estranged father for a job, the old man suddenly decides he wants his family in his life, and takes a particular liking to his young grandson, J. Paul Getty III (during this section of the film it's impossible not to be grateful Spacey is no longer playing the the old man.).

Flash forward a few years to 1973, and and the 16 year old Getty III (called Paul by his family and now played by Charlie Plummer, no releation to Christopher) is kidnapped while vacationing in Italy and held for a $17 million ransom. Getty the First refuses to pay a cent, reasoning A: If he pays the ransom all 14 of his grandchildren will get kidnapped, and B: He's a greedy, soulless S.O.B. and Hell is too good for him (we may have made up one of those.). But what he will do is pay for his own personal security specialist, ex-government agent Fletcher Chase (Mark Wahlberg) to investigate and find Paul. This pairs Chase and Gail in a struggle against not only the kidnappers, but against the elder Getty, who has more up his sleeve than it seems.

The performances are great across the board, with the always dependable Williams ably carrying the the film with a tough buy vulnerable turn as the terrified but determined mother, and Wahlberg reminding us how good he can be with really good material. But Plummer easily has the juiciest role, and he gives it everything he's got, making Getty alternately charismatic, repugnant, ruthless, and even occasionally showing us a streak of humanity, as he does actually seem to love his grandson (or at least as close as he can come to love.). It's a performance that ranks with the best of his career, and he's easily deserving of an Oscar nomination.  While Spacey had to wear old age makeup for the role, Scott has to rely on make up and CGI trickery to de-age Plumber for a few scenes, and it works as well as that sort of thing can. But while, despite the scandal, Spacey remains a great actor, it's hard to imagine anyone else nailing this role the way Plummer does.

Scott and cinematographer Dariusz Wolski take full advantage of the Italian locations, creating a sense of style and atmosphere that some times invites comparison to Copploa's Godfather movies in an entirely good way. The tension and drama of the situation are palpable throughout, despite the outcome of the incident being a matter of historical record

Ridley Scott bounces back from the disappointment of this summer's so-so Alien: Covenant to regain much of the career momentum he achieved with The Martian. He's used his considerable skill to overcome a setback that would have destroyed most productions, and in the process added another great movie to his filmography.