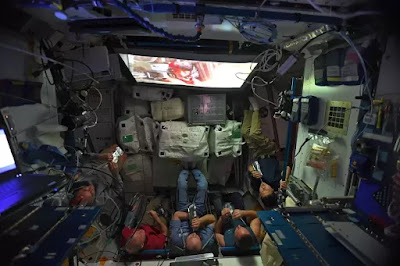 You haven't watched Star Wars until you've watched it in space.  Well for the majority of us that's never going to happen, unless Elon Musk pulls another future tech invention out of his electric, Mars-loving hat in the next few years.  Anyway for a lucky few astronauts on-board the International Space Station they were fortunate enough to watch Star Wars: The Last Jedi while orbiting the Earth at 17,150 miles per hour.  Now the Force is definitely with them.

NASA astronaut Mark T. Vande Hei tweeted a picture of himself and his space colleagues settling down to movie night.  Lets be honest I doubt this has Dolby Atmos sound and 3D 4K but who cares when you're watching Star Wars from here?