One Life Saved, the World Entire Saved: Schindler’s List & the Passing of a Survivor of WWII 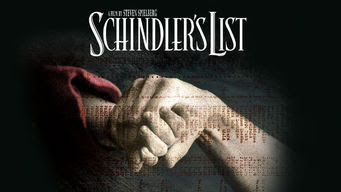 All of us who find or search for this page have something in common: a love of great movies, the joy they bring us and an admiration for the people who have brought amazing ideas to life.  I am a Star Wars enthusiast, and will watch anything by Spielberg when it is available.  Goonies, ET, everything Indy, everything Marty.  All of these fantasies fueled the emerging hopes of my childhood.

The fanciful and wonderful movies of my youth that led me to look for the great mysteries of this world.  And then I found a great mystery confronting my sensibilities, my stomach and my own relationship to the world around me.  When I was 18, I came across Schindler’s List.  It was only three weeks after my grandmother died, the matriarch of the family.  I often refer to her as St Granny because of the place her love has had in my life – even after her repose in the Lord.  I don’t remember the occasion, but a lot of the family was gathered together and watched the movie, which was aired without commercial interruption.  Drama of this sort was not something we generally did as a family.  We were into comedies, stand-up comedians, and family stories.  This was a special evening. 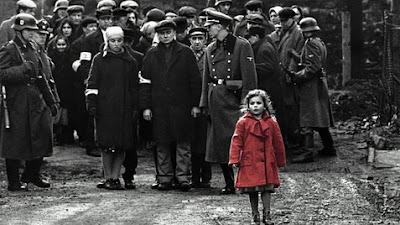 I remember quite vividly the little girl in the red coat.  Tremendous slaughter was raining down around her.  Families were rent asunder or completely obliterated.  And this young beacon of the hope of the future was carted off to an uncertain and bleak future.  Marching along the body strewn streets, that little girl disappeared from our view for more than an hour, before she emerged again most tragically.  The world dipped once again back into the dark contrast of black and white.  All color was gone from our eyes.

This evening with my family, confronting the horrors of a distancing memory, sticks out in my mind.  My grandfather, who rarely spoke about his time in the war, (though he was probably part of the liberating American forces) was with us.  Having just lost his wife of 45 years he studied the film with the stiff upper lip and strength of the greatest generation.  That told me volumes about the era as well.

And now just a few nights ago, I was at the bedside of a Ukrainian immigrant who was living out her last few hours on this side of the Kingdom of Heaven.  I didn’t know her story.  She was ill for much of the time that I have been assigned to my current parish.  I had heard of her generosity and hard work for the building up of the parish community.  How generations of kid in the parish would get a few pennies or a secret piece of candy.  I heard how she would show up to prepare for a parish dinner at 4:30 AM.  She never complained.  She never was derogatory to a single person.  And she was almost another little girl in a red coat.

As I stood by her failing body, her son spoke with great love about his mother.  His love and devotion was evident in the retelling of her story, and how it forged her into the holy and devoted mother that she was.  From an area of eastern Ukraine, her community had a similar experience to those in Krakow.  By no means a Jewish community, they were still targets of the Nazi regime.  At a young age, she was scooped up off of the streets on a random day, loaded onto an unaccommodating rail car headed for German farm country.  The rest of her story was equally remarkable, and her triumph through the adversity and pain was evident at every turn.  It’s a great story, and yet will remain an unknown mystery between God, herself and those with whom she was closest.

As her son and I were talking, he mentioned that she rarely spoke of her wartime experience.  At home, she worked the garden, stacked wood and fed her family and neighbors.  She hardly ever spoke about her earliest years.  He continued his short recounting of a remarkable life by talking about Schindler’s List.  His mother “never talked about her life during the war.  But one night we were watching Schindler’s List and she pointed at the screen and said ‘That’s it.  That’s exactly how it was back then.’” 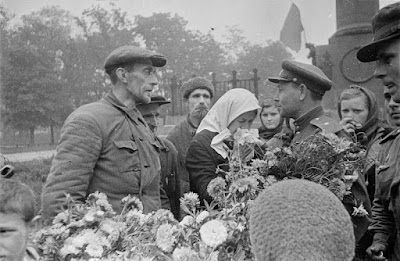 My grandfather and this noble woman, to both a significant and a tremendous degree, faced the demonic and evil elements that walk to and fro upon the face of this earth and overcame it through their commitment, humility and sacrificial efforts.  Their stories can no longer be told, just remembered.  The fanciful and wondrous hope of our youth breaks to a heartbreaking but profound adulthood rife with horrors, but yielding to a hope for a resilient and even greater future.  Death is inevitable.  Our preparation for personal strength, valiant struggle through overwhelming adversity, and hope beyond for the world that is yet to be born, is what makes us truly human and honors those mentioned here.  My grandfather for his service, Spielberg for allowing his craft to maturity in preparation of this project, and for the newly departed mother of my parish, who endured all yet never wavered in her hope.

Jim is a huge Star Wars fan, in addition to his duties as a parish priest and father of three.  Many of his sermons contain veiled references to the Galaxy far, far, away (though they are used to draw attention to larger truths).  He lives in the Finger Lakes region of New York, watches too many history documentaries, is a conservative Dead Head, and is also a blogger for Coffee With Kenobi and at The Force and Faith Blog.  He would love to be contacted at adelphotheos@gmail.com or on Twitter @adelphotheos.