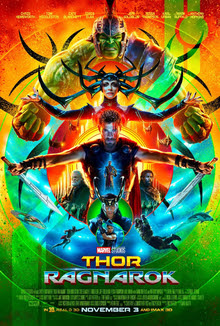 Reviewed by by Patrick & Paul Gibbs

It seems there has been a backlash against the original Thor over time, but personally we are quite fond of Kenneth Branagh's film.  Natalie Portman's Jane Foster character has been vilified by many, and she was indeed a bit of of a swooning Mary Swann (a hybrid of the Mary Sue designation and Twilight's Bella Swann, who is basically a Mary Sue without the "good at things" element), but the combination of King Lear (Edgar and Edmund, the sons of Glouchester, to be specific) and Crocodile Dundee with a Norse God was an awful lot of fun, and after the misfire of Iron Man 2 it was the movie that sold us on actually looking forward to The Avengers. The sequel, The Dark World, wasn't terrible by any means, it was probably the most lackluster entry from Marvel Studios (unless you count The Incredible Hulk), and certainly didn't measure up with the Captain America sequels. Between that, and the fact that Wonder Woman set a new standard for Gods and superheroes, Thor: Ragnorok had its work cut out for it in creating serious excitement (except perhaps among the crowd that swoons and whoops like the cast of Spring Breakers every time Chris Hemsworth takes his shirt off, or anglophile fan girls who can't get enough of Tom Hiddleston doing Sam Malone "just lyin' routine (that may be our most obscure reference of the year.).

Two years after the Battle of Sokovia, Thor (Hemsworth) has been unsuccessfully searching for the Infinity Stones, and is now imprisoned by the fire demon Surtur (voiced by Clancy Brown), who eventually reveals that Thor's father Odin is no longer on Asgard, and that the realm will soon be destroyed in the prophesied Ragnarök, once Surtur unites his crown with the Eternal Flame that burns beneath the city. Luckily, our hero defeats Surtur and claims his crown, believing he has prevented the event.

Thor heads back to Asgard, where (as we know from the last film) Loki is posing as Odin, and Thor forces his brother to help him find their father. When they do find him. Odin reveals that his true firstborn is not Thor, but a daughter named , Hela (Blanchett), and that she will soon escape from a prison she was sealed in long ago. Hela had been the leader of Asgard's armies, and had conquered the Nine Realms with Odin, but had been imprisoned and written out of history after her ambitions became too great.  Once Hela shows up to take the throne, Thor and Loki must run for their lives, and head off to another realm.


The film is a bit on the frenzied side, and is much more based in self parody than the other entries in the series (in fact, it's probably Marvel's most overtly comedic film, even more than Spider-Man: Homecoming or the Guardians of the Galaxy movies), but it all manages to work thanks to the deft hand of director Taika Waititi (Hunt For The Wilderpeople) and a cast who is clearly having a lot of fun. Waititi seems to be channeling goofy B sci-fi (especially the Dino De Laurentis Flash Gordon, right down to the electronica soundtrack) and some people might even compare this to The Fifth Element, which would be a great comparison except this movie actually works and is funny. Hemsworth is gloriously good, with Waititi making much better use of the actor's strong comic abilities than Paul Feig did in Ghostbusters (the director has sited Jack Burton in Big Trouble In Little China as inspiration for his approach to Thor) and of course Hemsworth  more than easily handles himself in the action. The fact this actor hasn't managed a megahit outside of the MCU speaks partially to mediocre and even bad material (The Hunstsman films, Blackhat and Red Dawn) but even more to the fact that the star system is over (his two features with Ron Howard deserved far more attention than they received). Hiddleston's Loki is as perfect as always (getting perhaps the biggest laugh in the movie with a single reaction shot), and Idris Elba's Heimdall is finally given something to do (though he is still underused.). Jeff Goldblum fans are going to love his goofy performance as The Grandmaster, and Tessa Thompson (Creed) gives a breakout performance as Valkyrie. Karl Urban is a riot as Skurge, an Asgardian tough guy who plays like a cross between Beowulf and Dwight Schrute. As for Cate Blanchett, one of the very best actresses working in film, she has proven herself so many times as one of the very best actresses out there that this time she is content with providing the film with a villain, and frankly, being so smoking hot that it is genuinely disarming. Blanchett has been outspoken recently about shaming and the right for women to look sexy without it being an invitation (and she is absolutely right.). If we hadn't praised her so often in past for her talent and dignity we might feel more sheepish about saying anything, but this is as much about a different use of her considerable presence as the tightness of her outfit, and she has an empowering quality on screen  that illustrates the point she is has been making off screen.

And of course, the biggest draw this movie has to offer is the Not So Jolly Green Giant and his alter ego, Bruce Banner (Ruffalo), and this is the first move where Hulk gets more screen time than Banner does. The evolution of the character here was inevitable, and those who have a problem with it can take it up with the big guy himself. Everyone else will be grinning from ear to ear and applauding more than once.

It may well be that the most important  accomplishment of this film is to bridge the gap between the worlds of The Avengers and Guardians of the Galaxy (in terms of tone and universe) before the officially meet in Infinity War, and it does so better than we thought was possible. This is definitely the kind of movie that you grade on a curve, and it has to be judged more as the latest Marvel film than simply as a film, but at this point the MCU has to be looked at as it's own thing, more like the biggest, most spectacular television series ever made than it is anything else. Or better yet, compare it to nothing at all, because now matter how hard others may try (and this is coming from people counting the hours until Justice League) nothing else can ever quite be the MCU.