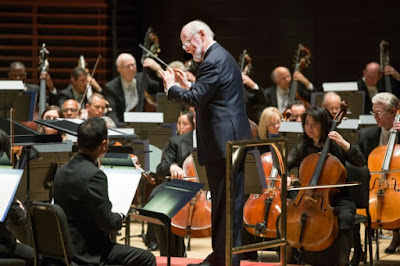 Mr. Williams and Stéphane Denève to Lead Orchestra
in Program of the Composer’s Film and Concert Music
Orchestra Subscribers Get First Access to Tickets Starting Today
John Williams to join @PhilaOrchestra for special benefit concert featuring some of his most beloved film and concert music 4/18
The Philadelphia Orchestra is delighted to welcome back five-time Academy Award- and 23-time Grammy Award-winning composer John Williams for a special one-night-only benefit concert on Wednesday, April 18, 2017 at Verizon Hall, curated specifically to celebrate the connection he shares with the Orchestra and Principal Guest Conductor Stéphane Denève. Mr. Williams and Mr. Denève will share the podium for the performance, which will feature the composer's popular Tuba Concerto (led by Mr. Denève on the first half of the concert and featuring Philadelphia Orchestra Principal Tuba Carol Jantsch) and selections from his film scores including Indiana Jones, Harry Potter, Star Wars and others (led by Mr. Williams on the second half of the concert). Philadelphia Orchestra subscribers get priority access to tickets beginning today. Single tickets will go on sale to the general public at a later date.
"I have been so proud to hear from the great John Williams how much he enjoyed conducting The Philadelphia Orchestra during our celebration of his music in 2016,” said Philadelphia Orchestra Principal Guest Conductor Stéphane Denève. “His return to Verizon Hall to conduct some of his most famous film scores is an extremely rare and inspiring occasion. It will be an immense honor and a deep joy for me to share the stage with him that night and to interpret his fabulous Tuba Concerto with soloist Carol Jantsch.”
“Over the past 10 years, I have had the privilege to develop a close relationship with John Williams, to discover that this precious man is as wondrous as his music is,” continued Denève. “I treasure this beautiful friendship and I am thrilled to share my admiration for both his concert and film music with Philadelphia audiences."
John Williams, Stéphane Denève, and the musicians of The Philadelphia Orchestra are graciously donating their services for this concert.
John Williams in Concert
April 18 at 7:30 PM––Wednesday evening––Verizon Hall at The Kimmel Center for the Performing Arts
John Williams Conductor
Stéphane Denève Conductor
Carol Jantsch Tuba
Selections from film scores including:
Indiana Jones
Harry Potter
Star Wars
JFK
Plus: Tuba Concerto featuring Philadelphia Orchestra Principal Tuba Carol Jantsch
*Program subject to change; additional details to be announced at a later date