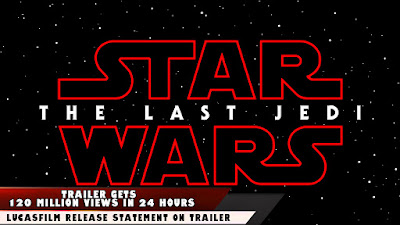 It seemed our wait for the official trailer to Star Wars: The Last Jedi would never end but last week we finally got to witness two minutes and twenty four seconds of new Star Wars.  The trailer was initially released during Monday Night Football in the U.S. and then on YouTube straight after.

Lucasfilm have today proudly revealed that the trailer has been watched a planet exploding 120.1 million times and that was just in the first 24 hours.  Lucasfilm tell us:

"Earlier this week, the full trailer for Star Wars: The Last Jedi arrived on Monday Night Football and online. In just 24 hours, the trailer was viewed more than 120.1 million times worldwide, making it one of the biggest trailer debuts of all time. It had 29.1 million more views than the film's first teaser released at Star Wars Celebration last April, and there are 242K (and counting) Twitter posts surrounding Star Wars: The Last Jedi this week."

"But it's your response to the trailer and eagerness to see Star Wars: The Last Jedi that has us feeling most proud. It's difficult to articulate what these view numbers, your online discussions, and your reaction videos (which we watch!) mean to us. We are humbled and grateful. To those of you who have already bought your tickets for opening weekend, thank you. Many shows have sold out in the US, and the UK/Ireland box office had one of its biggest pre-sales ever. But rest assured, there are plenty of seats still available! In just two short months, much will be revealed about Rey, Kylo Ren, Finn, General Leia, Luke...and our new friends, the porgs. Thank you to Star Wars fans everywhere. The Force is with you."

Those are some impressive numbers.  If you're wondering if that's a record well I can tell you it isn't.  It comes in fourth.  Above it are Thor: Ragnarok (136 million), The Fate of the Furious (139 million) and IT (197 million).