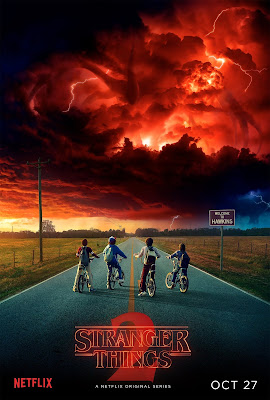 
The Duffer Brothers '80's nostalgia horror/sci-fi hit may literally be the biggest television show to ever hit the internet, and anticipation of the second installment has has huge.

Set almost a year after the events of the first season, Stranger Things 2 finds Will, Mike, Dustin and Lucas trying to adjust to life returning to something approaching normalcy, and preparing for Halloween 1984, and they all have killer Ghostbusters costumes. While Mike (Wolfhard) pines for Eleven, Lucas and Dustin(McLoughlin and Matarazzo) meet a new girl at school, Max (Sink) who has beautiful red hair and serious video game skills. Will is just trying to figure out where he fits in, as his mother Joyce (Ryder) is afraid to let him out of her sight unless he is with Jonathan, and has brought a new boyfriend (Astin) into their lives. Meanwhile, Nancy and Steve try to move on with life, but Nancy (like much of the internet) can't seem to get over what happened to her friend Barb. Life is of course anything but normal for our friends in Hawkins, and it isn't long before Hawkins Lab and other unpleasant aspects of the previous year start to return to complicate matters.

o
Stranger Things 2 plays very much like a movie sequel, just as the original played more like a film than a series, and it's a really good sequel at that, full of everything we loved about the original and plenty of new surprises. The original cast doesn't seem to have missed a step, with Brown, Harbour and Ryder being standouts once again, though Matarazzo and Keery really shine this time around, and Schnapp gets a lot more of chance to show off acting chops this time.. The new cast members really gel, especially Sadie Sink (The Glass Castle) as Max, who was easily my favorite addition to the mix, and Paul Reiser as Dr. Owens. Astin is strong as Bob, Joyce's new boyfriend, ably portraying both the aspects that Joyce is drawn to and Jonathan finds so off putting.  The most problematic new character is Billy (Dacre Montgomery of Power Rangers), Max's bullying stepbrother. Montgomery is a talented actor but isn't entirely convincing as a High Schooler, and the character plays as across between a Stephen King bully and Mallory's boyfriend Nick from Family Ties.

Perhaps fearing competing too much with the film version of It, the King influence seems takes a major backseat to the Spielberg one, as we see echoes references to E.T, Gremlins, The Goonies, (listen for Astin's line),  Lost World (mixed with Aliens and a little bit of Roland Emmerich's Godzilla) and even what might be a very brief subtle nod to Schindler's List (don't worry, it's not tasteless.) Even more so than the first times, there is no real attempt to hide the fact that a big part of the premise is invoking past classics (a hilarious moment with Max even pokes fun at this element of the show), and one really can't hold that against it as long as it is so clearly acknowledged.

The presence of Andrew Stanton (Finding Nemo, John Carter) directing some episodes a noticeably bigger budget help create a true blockbuster feel, and the effects are terrific. The story seems to drift in questionable directions at times, but it all melds together eventually into something very satisfying.

The question of how many of these can be done before we start to lose the charm of the childhood element remains a question, as does whether this a world we want to fully know or whether eventually explaining too much will detract from it all. But so far, so good, and Stranger Things 2 is one of the great entertainment deliveries of the year.