Movie Review: Moving and Involving "Only The Brave" Is One Of The Year's Most Welcome Surprises 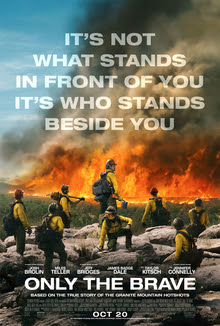 
Director Joseph Kosinksi made a name for himself with 2010's Tron: Legacy, but it wasn't necessarily a good name (in fairness, his name was "Kosinski" to begin with.). It was more of a mixed name - a guy who could create loud spectacles and give us eye popping visuals, but couldn't deliver substance or a cohesive story line -  and that mixed named only continued with Oblivion, which we maintain was an entertaining (if disposable) movie that unfortunately just felt far too much like too many genuine sci fi classics, from the overall Ray Bradbury feel to the surprise twist that it turned out we were actually watching Duncan Jones' indie classic Moon the whole time.

Now, before he moves on to taking the place of the late Tony Scott on Top Gun: Maverick, Kosinki has delivered the "based on a true story" firefighter drama Only The Brave, the story of the Granite Mountain Hotshots, an elite group of men trained to fight wildfires from the ground. If there are two film genres (aside from military movies) that are constantly in danger of getting bogged down in maudlin and macho hero worship, it's true life dramas and firefighter movies. Backdraft was cheesy and unabashedly sentimental but earnest and exciting, but Ladder 49 should not be viewed while operating heavy machinery, if you get our drift. This looked like an American cowboy, rugged "real men" movie that was going to be tough to sit through, and especially with the title itself dripping with testosterone, we went in with pretty low expectations. And it is indeed full of rugged cowboy types and a strong (though not overplayed) sense of Americana. But it's also very engaging, moving and surprisingly thoughtful, and shot with a keen eye without every trying too hard to dazzle us. It marks Kozinki's arrival as a director with range and an ability to tell good a story, and to get top flight performances from a cast. We've gone from wondering if he can pull off Top Gun to being excited to see what he chooses as a follow up.

The story centers around Eric "Supe" Marsh (Josh Brolin) , the leader of the outfit and a man so devoted to his job/obsession that has little room for anything else, barely fitting in his wife Amanda (Jennifer Connelly.). Marsh eats, sleeps and breathes fire (he's actually up for a small role in How To Train Your Dragon 3) and  he expects nothing less from his crew. But when Brendan McDonough (Miles Teller) - a young recovering drug addict who needs needs a chance to become a better person and provide for his newly born daughter - wants to join the team, Marsh surprises everyone by giving the kid a chance. When the out of shape Brendan joins the team for a long run, only to throw up more than once and finish more than an hour later than the others, he earns the nickname "Donut" from a group of guys who don't want or trust him as they prepare to certify as the first Hotshot team in their region. But Brendan is determined to stick with it, especially when it becomes clear that no one believes he will.

The story is quite formulaic and largely devoid of surprises (though when it does offer them, they really do surprise) and doesn't do anything to brake the mold. But that ends up being a very strong choice, as Kosinki is very comfortable letting it be a movie with a strong sense of itself, and it keeps the audience hooked by making you care about the characters because they feel like real people (even when they are filling in all of the requisite character types.).

It should come as a surprise to no one that the stellar cast is what makes this so special, with Brolin leading the way by making his manly man gruff leader so vulnerable and human, and Teller daringly playing Brendan as the unexceptional guy he is, without superstar charisma or anything screaming out "this kid is the lead in a movie", which makes us care about him so much more as he strives to find his better self.  The friction turned friendship between Donut and Mack (Taylor Kitsch, in what is easily his most comfortable and solid big screen performance) is very predictable, but it couldn't play much better if it tried to (and again, Kosinki's masterstroke with this film is in knowing just where the line of trying too hard is and almost never crossing it.). The perennially underrated James Badge Dale adds great support as Jesse Steed, Marsh's trusted second in command, and Jeff Bridges (seemingly here in a somewhat thankless supporting role because he fights for his user, Kosinski) manages to finally break out of his pattern of just repeating his Rooster Cogburn performance (he slips closer to the voice at some times than others, but keeps it grounded) while being so country he even wears a cowboy hat at times.

But the standout here is Jennifer Connelly, who has become one of the best "in the moment" actors in the business. Connelly's ability to portray strong emotions by refuse to "emote:, but instead just letting her character react honestly to what is going on around her is remarkable, and she can find the truth in even the over the top moments. She a prime example of what the Meisner' method can do when it's done right.

Probably the biggest major flaw to the movie is that it assumes too much in terms the audience's understanding of the techniques used to fight wildfires. While the choice to avoid talking down to the audience is appreciated, we very freely admit that it took us some time to figure out why these guys were literally fighting fire with fire. Looking back the next day, the film teaches you a lot about the subject, but it can be quite frustrating at times while watching it for the first time.

Only The Brave is well worth your time and the price of  a ticket, and if you're in an area where it is playing in IMAX, so much the better.