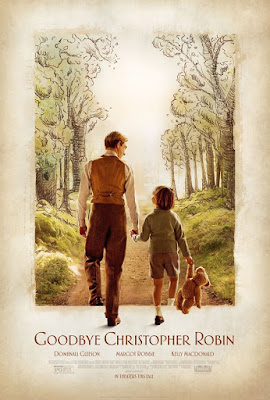 
"Poetry and hums aren’t things which you get, they’re things which get you. And all you can do is to go where they can find you." - Winnie-The-Pooh

A.A. Milne's classic stories "got" a lot of people, and continue to do so. The feeling of childlike wonder and innocence combined with a profound sense of wisdom is truly timeless and has inspired many, both in life and art (would Forrest Gump exist without the influence of the silly old bear? We don't think so.).  They are very personal and special to us as a stage adaptation we created was a major step in our creative careers, and our love for the characters and for Milne's words is deeply ingrained in us. Goodbye Christopher Robin is being easily dismissed as a Finding Neverland wannabe and as "conventional" film by too many, and that is more than unfortunate. While there is no shortage of bad things being said about Harvey Weinstein right now, perhaps the only one that is being missed is that his fierce overselling of posh British period dramas as inherently being Oscar bait lead to such a backlash against any movie that falls near that genre, and it has become critically incorrect to enjoy such films.

Alan "A.A." Milne (Gleeson) has returned home to London after serving in the battlefields of France during the Great War, but he's not really back, as the person he used to be seems to have been a casualty of war. He finds it difficult to go back to writing the kind of farces that made a name for him in the West End when he is still so troubled by the war, and light comedy is feeling a bit false to Alan (or "Blue" as his wife calls him) after observing the world at its worst. Blue wife, Dorothy (or "Dafne" as he calls her) is  are eager for him to return to writing, and she's not the only one. He tries to get back into the swing of things, but just isn't feeling it. Meanwhile, Dafne (Robbie),  gives birth to a son, whom they name Christopher Robin. The couple hires a Nanny name Olive (Macdonald), a kind woman who is devoted to the boy (who calls her "Nou".). The boy answers to the nickname "Billy Moon" (Moon because that's how he pronounced "Milne" when he was learning to talk, and Billy because his parents were very indecisive when naming him, and themselves for that matter.).

Alan abruptly decides that a change of scenery is in order, as well as a change of focus. He buys a house in Ashdown, near Sussex, with the intention of getting away from it all and writing a book about the evils of war.  But when Dafne goes back to London after a fight with Blue, and the Nanny must leave for a few days to tend to her ailing mother, Blue and and Billy are stuck alone together. Well, not completely alone, as Billy has built up quite a collection of stuffed animal friends, his favorite being a bear named for a real one he saw at the London Zoo, who was called "Winnie" because he was brought in from Winnipeg (the bear is easily the one with most straightforward back story behind his name.).  During this time, father, son and bear bond, and the innocence joys of childhood transfix Blue, who is suddenly see a world that is the way it should be, and one worth writing about as well.

This chronicle of the origins of the world's most famous little bear is at times quite sweet, but never maudlin, and others quite melancholy, but never overly dismal. The writers and director choose to play things fairly safe, but it's a very effective mix and as accurate or more so than the average "true story" film.  Some of the dialogue is a bit on the nose at times, but the characters are so engaging and the emotions so sincere that it's a pretty minor complaint.

Gleeson is a gifted actor, and he does a terrific job as Blue. He is easy to compare to a young Ralph Fiennes without the hindrance of being so heavily pigeonholed into playing the either the brooding romantic lead or the madman. Robbie does solid work as the film's most difficult character, and Maconald is impossible not to love. But the breakout performance is young Will Tilston as Billy Moon/Christopher Robin, and it's a lot more than just being cute and precocious. The actor brilliantly portrays the conflicted feelings stirring inside this creative and loving but horribly overburdened little boy, and both Tilston and director Simon Curtis deserve raves for the performance.  Alex Lawther, as the young man version of the character, is also quite memorable, but the movie belongs to Tilston, which is just as it should be.

Goodbye Christopher Robin is a touching film that will tug at your heart but avoids feeling cloying or manufactured. it may be "conventional", but sometimes a film, even an Oscar bait film, needs to put aside trying to reinvent the wheel and just be content with giving you a smooth, reliable ride. This is  abeautiful little gem that deserves an audience, and we hope it gets one.