Movie Review: "The Foreigner" Is A Waste of Stars Talent And Your Time 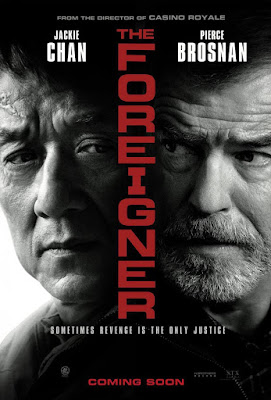 
A thriller can be many things. But one thing it is not is 2 hours of people whining and griping at each other punctuated by what adds up to about 14 minutes of  fighting and explosions. And sadly, that's about all that The Foreigner has to offer as a film.

Based on the novel The Chinaman by Stephen Leather,  the film ostensibly is about Ngoc Minh Quan  (Jackie Chan) a Vietnamese retired Navy SEAL who is now a small business owner living in England, whose world is shattered when a bombing by a group calling themselves "The Authentic IRA" kills his daughter Fan (Katie Leung, best known as Cho Chang, Harry Potter's first girlfriend.) Determined to find the people responsible, Quan starts hounding Liam Hennessy (Pierce Brosnan), a former IRA member turned government official liaison between the British and Irish, charged with managing Irish affairs and helping to keep the peace. Quan believes that Hennessy either knows who is responsible for the attack or can lead him to someone who does, and refuses to let up until he gets answers. Eventually, he has to use his proverbial "very particular set of skills" to get results.

This sounds like a workable enough premise, even if the IRA doesn't feel like the most topical subject, and the casting of Brosnan and Chan, combined with the presence of Martin Campbell., director of GoldenEye and Casino Royale, two of the best films in the 007 franchise, gives plenty of reason to go into The Foreigner expecting a very solid action picture. So what went wrong?

First of all, though Chan is given top billing and sold as a brooding, kick ass Asian Liam Neeson, he isn't the lead in this movie. In fact, when you put all of his scenes together it adds up to maybe 20 minutes of screen time. The vast majority of the film follows Bronsan's Hennessy, who is established right away as a vile man who is cheating on his wife and not particularly loyal to any cause save his own career. Brosnan gives his performance his level best, but he spends the bulk of the film either denying things or having yelling matches with other characters (most of whom are named Sean or Patrick) about who is the most Irish Irishman. In fact, the Emerald Isle clichés are piled so heavily and at such a constant pace that we kept waiting for a scene showing Brosnan listening to U2 or Sinéad O'Connor while cutting up pieces of potato to put in his bowl of Lucky Charms cereal.

Chan does some solid acting in the very limited time he is given, indicating that the idea of putting him in a serious action thriller was not a bad one, but his underuse here is really quite startling, and while we were not adverse to the idea of keeping the action more grounded in reality, you don't go to a Jackie Chan movie to watch him fire a machine gun. Meanwhile, the various Seans and Patricks in the supporting cast make little to no impression, including the bland Rory Fleck Byrne as Hennesy's nephew, Sean, an Iraq war Special Ops vet who is working for his uncle but sleeping with his aunt (Orla Brady); Niall MacNamee as Patrick O'Reilly, the stoic terrorist who built the bomb that killed Fan, or Michael McElhatton and Dermot Crowley as Sean "Patrick Shaunessy and Patrick "Sean" Kilpatrick, Hennessy's right hand and his top IRA contact, respectively (it's possible we made up those last two character names.). As for the women in the film, the only two of note that aren't there to be sleeping with Henessy or Sean are Leung, who is one scene and almost succeeds in covering up her thick Scottish accent, and Lia Williams as Katherine Davies, the British official who Hennesy reports to, who gives a credible enough "which Redgrave am I thinking of right now?" performance but doesn't exactly make a lasting impression.

Campbell does his best with what he has been given to work worth, which includes a limited budget and a truly terrible script by David Marconi (whose research seems to have consisted of watching Patriot Games several times.). The moments where the professional soldiers and other analysts thoughtfully make laughably obvious conclusions such as "it sounds like he must have had training" after hearing that Quan fought off multiple armed assailants and set off a home made bomb in the embassy, or "he's probably in those woods" come often enough that it is hard not to think of Charles Durning and Menelaus "Pappy" O'Daniel interacting with his idiot sons/advisers in O Brother, Where Art Thou?

In terms of Campbell's filmography, this isn't even up there with Edge of Darkness, much less Casino Royale, but honestly, even the extras are unlikely to point to this one as one a career highlight. Whomever had primary final creative control here (there are no less than 26 credited producers, executive producers and associate producers)  dropped enough balls here to rival Brett Favre's all time NFL fumbling record. This was Campbell's chance to finally get out of movie jail after the Green Lantern debacle, but it's not likely to do much for his career one way or the other, because it will be largely forgotten by next weekend.