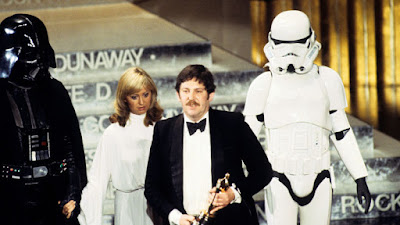 Sad news as we learn that legendary costume designer, John Mollo has died at the age of 86.

Mollo was best known for designing the costumes for Star Wars and in particular Darth Vader. Stormtroopers and Han Solo.  His work brought him an Oscar and went on to work with Ridley Scott on Alien.  He won a second Oscar after working on Sir Richard Attenborough's Ghandi.

During his work on Star Wars, Mollo used the artwork of Ralph McQuarrie for reference and had this to say about his encounter with George Lucas:

'Since I had just finished the work for Kubrick I thought I’d investigate and met George Lucas at Elstree Studios in Borehamwood.  George left me in no doubt. Audience mustn't consciously notice the costumes, he insisted. If they do, you have gone wrong.'

Mollo was a military expert and used his knowledge of trench armour from World War I and Nazi helmets to create the look of Darth Vader we've come to know today.  He also designed the costumes for one of my favourite TV shows, Hornblower starring Ioan Gruffudd.

A huge talent.  Thank you John for your wonderful work.