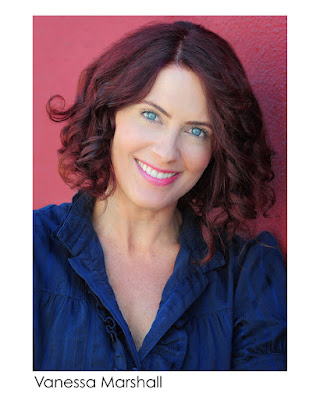 Vanessa Marshall's face may not be one you'd recognize walking down the street. You may not even know her name, but if you're a fan of animation or video games, you've heard her voice many times over. She's played everything from James Bond's car computer (007: Nightfire) to Agatha Christie's Antoinette Marceau (Murder on the Orient Express: The Video Game), and has so many Marvel and DC icons under her utility belt that she's a one woman Comic Con: Wonder Woman, Poison Ivy, Gamora, Black Widow, Black Canary, Mary Jane Watson, Catwoman, Batwoman and Vertigo are just a few of the characters she's brought to life. She has also lent her voice to such cartoon favorites as Ben 10, Johnny Bravo , Duck Dodgers, Garfield's Pet Force, What's New, Scooby Doo? and Pig Goat Banana Cricket.

Then again, if you're a sitcom fan, her face might indeed seem familiar, especially if you are as fond of madcap medics as I am: you may have spotted her as Becky, Doctor's Cox's basketball buddy on Scrubs, or possibly as Lt. Erica Johnson, Hawkeye's very married crush on M*A*S*H (though in the latter case you'd be confusing her with her mother, actress Joan Van Ark, who passed on her piercing blue eyes and enchanting smile to her daughter.).

But if you're reading an article from The Bearded Trio, it's a safe bet that, like me, you know her first and foremost as the voice of Captain Hera Syndulla of "The Ghost" on Disney XD's Star Wars Rebels, one of the very best shows on television, bar none, and still possibly my favorite new entry in Star Wars canon.

The show enters its fourth and final season this month, and after meeting her at the fifth annual Salt Lake Comic, where I appeared as a panelist, I had chance to chat with Vanessa about the show and her experiences in George Lucas' fabled galaxy far, far away . . .

Being a part of Star Wars in any form is a pretty big deal. You were a child of the '70's - how much of a fan were you growing up?
I’ve been a fan since the very first film!  A New Hope grabbed my heart and never let go!  It has become a tradition to stand in line on opening night, and I am looking forward to doing that in December! Christmas just gets better and better!

What made you gravitate toward voice over acting?
One time, a voice over agent saw me perform in a sketch comedy show, in which I played several different characters, and she suggested I look into doing voice over.  I did, and I have been with that agent for over 20 years now!  I never looked back!

So, you had, of course, already done voices in the Old Republic video game in 2011, but being a lead character on Rebels is a whole new level.  What were your thoughts on auditioning for the role, and your reaction to getting the job?
I was beyond thrilled.  I was actually just grateful to have auditioned for Hera.  When I got the role, my agent asked if she should send a paramedic!  I was crying tears of joy!  I will never forget that phone call!  It was a dream come true!

Rebels was really the kick off for a whole new era, and honestly, it initially acted as almost a beta test for fans that felt a bit skeptical that this saturation of new stuff might diminish how special it was instead of adding to it.  Did you get a sense from anyone that a lot was riding on this show?
I got the sense the Star Wars fans everywhere were hungry for more content, and I knew that Lucasfilm would deliver beyond their expectations.  I just hoped to live up to that!

Obviously the show has been a big success, and it truly exceeded not only my expectations, but my highest hopes. And the cast is great. Steve Blum actually recorded the outgoing message on my phone as Zeb, which means a lot of bill collectors get to hear him say "Karabast." Do you work very closely with the rest of the cast?

I love Steve!  He is hilarious!  We record together when possible.  Luckily, we all naturally got along. We bonded instantly.  While we all joke with each other, we are also able to get right down to business and tackle the work at hand.  So it is a good mix of fun and hard work.  I adore the Rebels cast and crew.  It has been a magical experience!


So, you said at Salt Lake Comic Con that Hera was your favorite voice character you've played, and you've got quite an impressive list of roles on your resume. What makes Hera so special to you, other than the obvious fact of being part of Star Wars?
I appreciate that Hera is such a great leader, fighter, and pilot, while also being so loving, kind and nurturing.  She is a terrific female role model for young girls.  I am honored to have brought her to life.  She inspires me to focus, to not take things personally, and to be of service to the highest good for the greatest number.  I often ask myself, “What would Hera do?"

One of the things I love about Hera Syndulla is that I see her as role model figure and a big step forward, and she's braking a mold. Star Wars is giving us some great feminist heroines, but to me what makes Hera unique in science fiction is that - and this may sound a bit out there, - the beautiful, alluring green skinned alien woman has been a staple of sci-fi for a long time, from the Orion slave girls on Star Trek to the Twi'lek dancer in Jabba's palace in Return of the Jedi to many others, they really have been largely a symbol of chauvinist fantasies.  So here's Hera, a powerful leader, the Captain of the ship and this strong, heroic figure  . . . maybe I'm over analyzing and people are going to read this and think "really? you're talking about the strides made in the way we represent green people?" . . .  but I think she signals a powerful shift and an exciting statement about the commitment to stronger depictions of women in science fiction.  Would you agree that she's a significant figure?

I would absolutely agree!  Hera is a terrific example of that powerful shift!  I think Rebels features a number of female roles that do precisely that! Sabine is actually my favorite!  I appreciate her moxie, her military mind, as well as her creativity.

We're moving into the final season of Rebels, which is sad and at the same time really exciting because of the things that are coming up, as we move toward the events of Rogue One and A New Hope. Hera is mentioned in Rogue One as "General Syndulla." Will we see her becoming an important figure in the new Rebel Alliance?
I hope so!  We shall watch and learn together.  Because even though I have read all the lines out loud in Season 4, only Dave Filoni knows what it will all look like!  I cannot wait to watch the premiere on October 16th!  Join me for live tweeting, please!!


The trailer teases at some possible developments in the Hera/Kanan relationship this season, which hearkens back to the novel A New Dawn by John Jackson Miller. We've also seen from Rogue One that there are no guarantees of all, or any, of these characters surviving. I'm not going to ask for any spoilers, but would it be fair to say that we're in for an emotional season?
I think, again, we would have to ask Dave Filoni!  I am sure it will be a satisfying ending to all that has come before!

What's next up for you when this is over? Will you be part of the Young Justice revival? And do you think think that there may be more Star Wars in your future?
Yes, I am in Young Justice!  Black Canary returns!  As far as future Star Wars goes? I am thrilled to be a part of Forces of Destiny!


If there's one thing above all else that you're going to take with you from your Star Wars: Rebels, experience, what would that be?
It would be my interactions with the fans.  I am so grateful to have met so many spectacular people, many of whom have become like family to me.  I look forward to many more years of that as well!
#StarWarsFamily4Life!

May The Fourth (Season) Be with You!