Book Review: "Close Encounters of the Third Kind: The Ultimate Visual History" Is a Must Own For Spielberg Fans

Close Encounters of the Third Kind: The Ultimate Visual History

Order Signed and Personalized By The Author

Out of Four
Reviewed by Paul Gibbs

Close Encounters has always held a special place in my heart among Spielberg's not films, not just because of its cinematic excellence, but because at the age of 12 I immersed myself in the story of its production by reading Bob Balaban's excellent Close Encounters of the Third Kind Diary, easily one of the most engaging and entertaining books ever written about filmmaking. This was essential in the development of my understanding of the filmmaking process, and as such I probably know more about the making of Close Encounters than any other feature film (with the exception of the cult classic schlock film Troll 2, in which I appeared as one of the evil vegetarian goblins.). In September of this year, I was chosen to be part of a panel at Salt Lake Comic Con called Close Encounters of the Third Kind at 40, in which a group of writers and filmmakers looked back at the film and its impact. While I may have been the second most wonky CE3K geek on the panel, my knowledge was far surpassed by our moderator, Michael Klastorin, a career unit publicist who informed us that his book Close Encounters of the Third Kind: The Ultimate Visual History would be published in the fall. Finding Klastorin a delightful, articulate and intelligent person with a wealth of knowledge, I was itching to read the book, and a few weeks ago he was kind enough to email me and offer me the chance to review it in advance for The Bearded Trio. Having spent the last week devouring and savoring this superb work, I can tell you it's one any serious Spielberg fan (and especially CE3K  fans) will want to own.


Exhaustively researched,cohesively organized and extremely engaging, The Ultimate Visual History belongs right alongside Balaban's book as the definitive accounts of the making of the film. Tracing it from early development (even going back as far as the moment in Spielberg's childhood when his father woke him up and took him out to see the Orionid meteor shower, creating his lifelong love of the night sky), and going all the way to the eventual completion of the 1997 Director's Edition, Klastorin's book is brimming over with information, but still manages to be a fast and eminently enjoyable read. From insight into the individual contributions of the various uncredited screeplay contributors to detailed looks at Joe Alves' set designs, the book actually contains plenty of material that was new to me.

Extensive interviews with Steven Spielberg himself provides detailed insight into all stages and facets of the film's production, and are augmented by interviews with many of the surviving cast and crew (regrettably, legendary cinematographer Vilmosz Zsigmond passed away in 2016.). Best of all are the interviews with Cary Guffey, the 4-year old who so beautifully portrayed young Barry Guiler. Guffey, now a financial analyst who ojky appeared in a few more films, tells delightful stories about the techniques Spielberg used to elicit  his performance, which are all the more amusing (and sometimes poignant, as in the story of how a misunderstanding got authentic tears from the child as he watched the aliens leave  ) told in his own words. Guffey's memory of the emotions of the experience is remarkable, and he paints a vivid picture of what it was like. Melinda Dillon also contributes some great anecdotes about the unfortunate injuries she suffered (and kept secret on set for fear of being replaced.).

As Close Encounters was a ground-breaking work of visual effects, detailed descriptions of how Douglas Trumbull and his crew created astonishing visuals are real highlight (in particular, the process for creating the clouds that appear when Barry is abducted fascinated me.). And the book is visually dazzling, with gorgeous color and black and white behind the scenes photos (and stills from the film}, as well storyboards, script pages  with notes from Spielberg, and even a telgram to Spielberg from Francois Truffaut .

Far from being a mere piece publicity cash-in on the 40th anniversary, this is top notch piece research and writing that enhances our knowledge and love of the film, and our celebration of this milestone.  It's a book I'm sure I'll re-read many times in years to come, and it has me anxious to read some of Klastorin's other works (such as his Back to the Future visual history). If your the kind of fasn who, well, reads The Bearded Trio, you'll want to read this book. 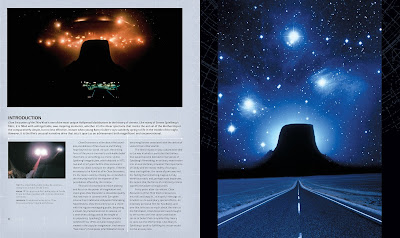