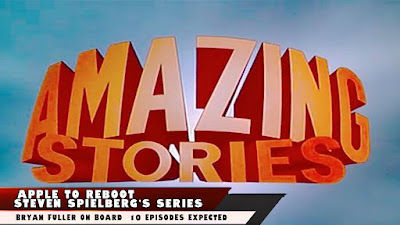 Steven Spielberg's Amazing Stories is set to return thanks to a deal struck up with Apple who continue to expand their ambitions of being a serious contender with popular streaming services such as Netflix.

Expect 10 episodes but at the moment we have no confirmation yet on what Spielberg's involvement will be.  In the original series Steven Spielberg directed a couple of episodes and had writing credits to 28 episodes.  What we do know however is Star Trek Discovery's Bryan Fuller is on board and it seems will play a major role in the revival of Amazing Stories.

The deal was struck between NBCUniversal and Apple last month.  NBC Entertainment president Jennifer Salke said Tuesday in a statement:

"It’s wonderful to be reunited with our colleagues Zack [Van Amburg] and Jamie [Erlicht] in their new capacity at Apple...We love being at the forefront of Apple's investment in scripted programming, and can't think of a better property than Spielberg's beloved Amazing Stories franchise with the genius of Bryan Fuller at the helm and more exciting creative partnerships to come."

Who would you like to direct or star in an episode of Amazing Stories and are you excited for a new series?  Let us know in the comments.