REVIEW - Universal Studios Pinball Tables Featuring E.T. Jaws and Back to the Future From Zen Studios 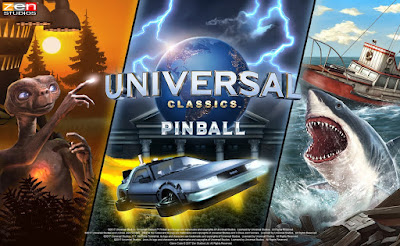 Zen Studios bring us three pinball tables based on classic movies from Universal Studios.  Jaws, Back to the Future and E.T. The Extra Terrestrial are the movies represented and will cost you £6.99 for the three.  I must add that you have to download Pinball FX3 first which is the platform these tables play on.  Don't worry, that's free and you get a free table included called Sorcerer's Lair.  Think of Pinball FX3 as your Steam for pinball tables.  Your purchases will always be there and thankfully the clever people at Zen Studios have made sure your old tables that you bought for Pinball FX2 are all compatible.  The latest incarnation has had a face lift and now all your table purchases are neatly organised on one screen that expands when you hover over them.


As a Spielberg fan I was eager to play the three tables based on Universal's classics and Jaws was the first I fired up.  I was testing on a laptop with an I7 processor and a humble Nvidia 950M graphics card.  Am I gonna need a bigger laptop? 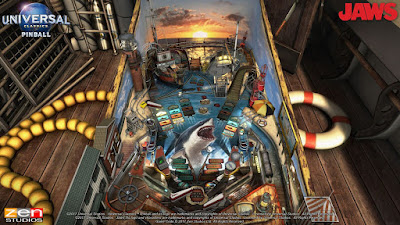 Jaws
The first thing I noticed was how glorious the table looks.  A fairly accurate interpretation of Quint stands at the front of The Orca and shark fins are a plenty.  Unfortunately there is no sign of Hooper or Brody in the game.

The famous Amity sign is displayed along the side of the table and in fact the whole table sits on what looks like the deck of the Orca boat.  The whole table is filled with props from the movie and buildings on the left give you that Amity feel.  At the back is the sun setting and from time to time you will get a transition from day to night giving that moody feel to the game.

As with most modern pinball games you can activate missions while you play, such as hunting the shark and buoy bumpers will activate rocking the table.  The atmosphere builds as Quint throws mild sarcastic insults at you.  The table is relatively simple but the subject matter and atmosphere make it a "one more play" table.

However there is a glaring 25-foot great white in the room and that's the music.  In fact this applies to all three tables. It's not licenced so you don't get the glorious familiar Jaws theme from John Williams.  For soundtrack fans its going to be one of the first thing they notice.  For pinball fans it won't matter but as these tables are going to attract the Universal, Spielberg and movie fan then I guess its going to be a talking point with the collection. 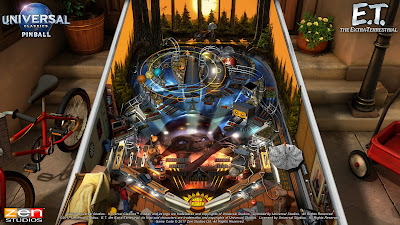 E.T. The Extra Terrestrial
Another table based on a Spielberg classic.  This time 1982's  E.T. The Extra Terrestrial.  This table has a lot more going on and subtle tips of the hat to the movie are in abundance.  The plunger is a shark grabber like the one Elliot shows to E.T. in the movie.  A model of the solar system is present and as the game starts we see Elliot throwing Reese's Pieces on the floor to attract E.T.

Of the three tables this one is the easiest to play and perhaps that was intentional to appeal to the younger generation.  You can rack up a huge score and unlock many of the missions in the game such as the bike chase.  Again the issue is the lack of John Williams soundtrack and the voice for Elliot is a little off the mark.  It took me a while to realise it was actually supposed to be Elliot and not Gertie.

Music and voice aside, the sound is wonderful with E.T. grunting and talking as you play.  Hitting E.T's spaceship a couple of times will cause it to take off leaving a hole in the table.  Hit the ball in to the hole to unlock different missions.  It really is a beautiful table and brought a nostalgic smile to my face. 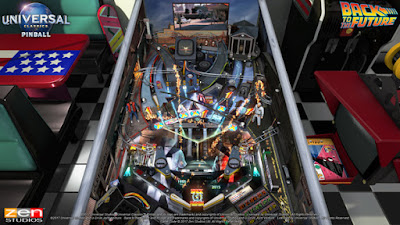 Back to the Future
Of the three this one is the most fun.  Of course the other two are great fun but the Back to the Future table has so much depth.  First off you have to choose your era.  1955, 1985 or 2015.  The music and table will change according to your choice along with the missions you can unlock during the game.  Steal back the Sports Almanac, repair the timeline and related multi-balls are just some of the features.  Speaking of multi-balls, this feature on this table is pleasingly intense with balls having a fire trailblazer just like the Delorean has when it reaches 88mph.

Again the music we come to love from Alan Silvestri is absent but the substitute does the job.  The voice acting is the best of all three tables with Doc and Marty sounding like the real thing.  Definitely as good as Telltale Games version.

Sticking with the sound element, this table has the most sound effects taken from the movie.  The Flux Capacitor, the Delorean and other familiar sounds from the movie are all present.  It makes it an exciting experience and I can see myself playing Back to the Future pinball for a long time to come.

Conclusion
At just over £2 a table there is plenty and I mean a plenty of fun to be had with these Universal tables.  There are different modes to play and features to unlock to ensure repeat playing.  Cross platform online play is also a thing if you enjoy that kind of challenge.  For me it's the casual pick up and play appeal coupled with the wonderful subject matter.  Zen Studios have a made a master stroke getting the licence for these classic movies and turning them into pinball tables.  I sincerely hope we get to see more.  Jurassic Park anyone?  How about an Apollo 13 table?  So many options and potential in the future.

The lack of the original soundtracks takes a little of the immersion away which is disappointing as Zen Studios have also done a bunch of Star Wars tables and they have the original and much loved soundtracks.

Don't let that little gripe distract you, the tables are a must for any Jaws, E.T. or Back to the Future fan and the price makes it even more attractive.

As mentioned at the top of the review, I played the games on a laptop with a modest setup and even though not enjoying 60FPS, I was able to play at 1920x1080 resolution with no issues.

The platform presented via Pinball FX3 is easy on the eye and a breeze to use and as mentioned you get a free table thrown in.  You can also try out the other tables for a limited time play so you can tell if you like the look of the table.  There are a huge amount of licenced tables such as Star Wars, Family Guy, Portal and Marvel to name a few.

If you're new to digital pinball tables then the Universal Classic Pack is a perfect introduction with the three tables presenting various levels of difficulty and variety.  It really does have something for the whole family from the charm of E.T, the dangers of Jaws to the fast pace of Back to the Future.