Movie Review: The Lego Concept Is Wearing Thin, But "Ninjago" Has More Than Enough Laughs 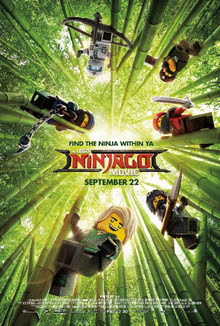 
We had never heard of Ninjago before seeing this film, and the exhaustive research involved in reading the Wikipedia entry on it was more effort than we felt like going to. Consequently, we weren't sure how well we'd be able to follow this latest installment in Warner Bros. attempt to make the Lego franchise as omnipresent as Marvel and DC. In turns out we didn't need to worry: if you've ever seen a Japanese children's show dubbed into English, or really any 30 minute toy commercial cartoon made since about 1978, you'll catch on very quickly to what The Lego Ninjago Movie is all about. And that's a good thing, because it's hard to think of a subgenre more ripe for parody.

The story centers around six teenagers living in the far-away land of Ninjago, trained by an old ninja master named Wu (voiced by Jackie Chan), to become ninjas with awesome gadgetss, vehicles dragons , and they protect the capital city at night from monsters sent by the warold Lord Garmadon (voiced by Justin
Theroux, the guy who is referenced in all of those tabloid headlines that make you think "Wait? Jennifer Aniston with Justin Timberlake now?"). Meanwhile, Lloyd Garmadon (voice by Dave Franco), the group's Green Ninja and leader, struggles every day with being known as the son the diabolical fiend who threatens the city, combined with all of the other angst that comes with having an absentee father.

When Lloyd learns about "the ultimate weapon" from Master Wu, he wants to use it, but Wu warns him that he is not ready. But during a confrontation with Garmadon, Lloyd makes a rash decision, putting the entire city of Ninjago in mortal danger and losing the trust of his team. Wu must set out to find "The ULTIMATE Ultimate Weapon" in order to save the city, and but he agrees to let Lloyd and the team accompany him on the perilous quest.

The story is quite formulaic and predictable, if a bit jumbled, but it's never really trying not to be. In fact if anything it's aiming at hitting all of the cliches of the teenage martial arts fantasy genre, and it pretty much gets them all, and the laughs come one after another, some of them very big ones indeed. The Lego movie universe is settling into being a sort of  kid friendly, modern "ZAZ" (Zucker, Abrahams and Zucker, the team behind Airplance! and The Naked Gun), and that makes for a fun but very superficial movie going experience. Where the original Lego Movie was a surprisingly deep and sly commentary that had genuine heart, the further we get into the spinoffs, the more it settles for formula, piling on the silliness and mayhem. This is the second entry this year, and if the goal is make this a Marvel style universe with a new Lego Fill In The Blank Movie every four to six months, it's likely to wear out it's welcome as we settle more and more into frenetic kiddie comedy that has less and less to do with the Lego world itself and is just more on a generic spoof world.

That's the worst case scenario, however, and The Lego Ninjago movie is still enough goofy fun on its own level to get a pass from us. The voice cast does good work, especially Chan (who somehow makes the word "green" absolutely hysterical), Theroux (who sounds a bit too much like Will Arnett but nails the comedic delivery so decisively that it doesn't matter) and Zach Woods as Zane, the White Ninja of Ice. Zane is a robot doing a very bad job of trying to blend in as an average teen, and this joke s probably far funnier than it should be ("If we were the Beatles, you would be John, you would be Paul, you would be George and I would be their computer."). Dave Franco and Olivia Munn are good as Lloyd and his mother, Koko, though they are saddled with what passes for dramatic moments in the movie and as such don't get to be the favorites, but the movie wouldn't work if they didn't work, and they deserve to get some credit.

The Lego Ninjgo Movie is really just a blip on the radar of Hollywood releases this year and is not anything that is likely to be remembered for long, but if you go into ready to have a good time and keep your expectations within reason, you will find yourself charmed by its silly antics, and there's just enough heart to make it all play. Where the franchise is headed and how long it can hold up remains to be seen, but for now, just have fun with it.