Movie Review: Lazy, Lackluster "Kingsman" Is Everything That Gives Sequels A Bad Name 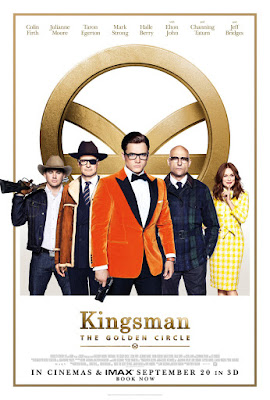 
2015's Kingsmen: The Secret Service was the kind of February release that defies the odds and really delivers. In fact, the low expectations that came with the release date are part of what made it feel like such a big deal. It was fresh and funny, and so full of dazzling action and enthusiastic performances that is was easy enough to forgive most of the shortcomings (the all too persistent bad taste factor that some sometimes really worked and sometimes just went too far, the self conscious running gag with Barack Obama that never worked . . . ) and it was a solid success with audiences and critics.

But a movie that relies as heavily on the freshness factor as Kingsman or Guardians of the Galaxy  runs an inherent risk by making a sequel, because it's easy to lose that quality. But where Guardians of the Galaxy Vol. 2 managed to succeed very well by delving deeper into the characters and by daring to be melancholy, Kingsman: The Golden Circle is the kind of Men in Black II style sequel that doesn't even try to feel original, banking on the hope that more of the same to an extreme is what people want. And in fairness, for some, that will be enough. But there was a marked difference between the responsiveness of the audience we watched this one with and the audiences when watching the first film, and free screenings tend to be where audiences go easiest on a film.

The new film opens with Eggsy (Taron Edgerton) having a dangerous run in with Charlie (Edward Holcroft), the fellow Kingsman in training whom he supposedly killed in the last film (this is a great sequence and gets the film off to a very promising start.). Eggsy then comes out on top, and goes back home to his girlfriend, Princess  Tilde (yes, that's right.  Despite spending and entire film building chemistry between Eggsy and and Roxy, they decided that the tacky ending joke was more important to follow up on.). Eggsy is preparing to meet Tilde's Royal parents for the first time, and is worried he won't measure up because he's just a street rat and she's a princess, so he asks the Genie to . . . sorry, wrong movie.

Meanwhile, a powerful drug csarina named Poppy (Julianne Moore) is planning something big, and she doesn't want the dapper do-gooders getting in the way. Poppy spearheads an attack on the Kingsmen themselves, hitting them where it hurts. With the H.Q. destroyed, Eggsy and Merlin (Mark Strong) are left looking for answers. A clue leads them to Kentucky, where they meet their American counterpart agency, The Statesman, which operates under the guise of a liquor company. Agents Tequila (Channing Tatum), Whiskey (Pedro Pascal) Ginger Ale (Halle Berry) and Champagne (Jeff Bridges, doing his best impression of himself in every movie since True Grit and almost succeeding) agree to help their sister agency take down Poppy, whose scheme becomes darker and more deadly than anyone imagined. But luckily for our heroes, The Statesmen have a familiar friend with them.

By far the biggest problem here is pacing, which is surprisingly slow and plodding, never establishing any sense of flow. When the action sequences come, most are solidly fun, but they largely feel like hyper kinetic rehashes of what we've seen before (do we really need to see the "Manners Maketh Man" scene a THIRD time?) But the complete lack of anything resembling a character arc for anyone is pretty pathetic, and there is an emotional investment of zero. The story just kind of awkwardly muddles its way along until it is over, with no surprises along the way (aside from the bad taste factor, which shouldn't be a surprise, but there is one moment involving planting a tracking device that was beyond awful.).

The talented cast does a good job, especially Mark Strong as Merlin, who is so good that he the movie is elevated whenever he is on screen. Pedro Pascal throws himself into his role with gusto, and the wonderful Julianne Moore tries to sell us on the belief that Poppy is as amusing a character as Vaughn and co-screenwriter Jane Goldman clearly and smugly seem to think she is. Berry and especially Tatum are largely wasted, and whether it's the script or lack of motivation, Edgerton and Firth are kind of just there, unable to quite recapture the terrific chemistry they had the first time around. That's not to say that they are bad, but it feels like a job this time around, not an enthusiastic labor of love. Elton John has some good moments playing himself, kidnapped by Poppy and forced to play for her, and the punchline to his presence in the film is eye rolling and tacky but clever and well done enough to hit the mark.

The story features a subtext about the war on drugs, and the way addicts have always been treated as criminals rather than victims, and it's a really promising idea but a bit too on the nose (it's actually hard to call it a subtext when it is so devoid of any subtlety.). There was the chance to delve into some complex and interesting issues and character motivations here, but the easiest and most superficial road is always chosen. And that in a nutshell it's what's wrong with this movie: no chances are taken. This is strictly an attempt to establish a bankable franchise, nothing more, playing it so safe that it actually becomes dangerously dull. It's almost akin to a Pirates of the Caribbean sequel, hoping to ride on the coattails of how memorable the first installment so special while sacrificing everything that made it so. But again, the comparison to Men in Black II and yes, even Wild Wild West seems perhaps the most apt. Now, Men in Black II actually improved on repeat viewing, but if this one does, you'll have to let us know. This is not a terrible film, and it's certainly not going to make our worst of the year list, it's just an extremely mediocre one that felt like a waste of our time.

Die hard fans who are easily satisfied by F-bomb and harsh cartoon violence may still eat this up, but even they are likely to feel that something is missing. We can only hope that Vaughn focuses his talents on worthier and more ambitious projects in the future.