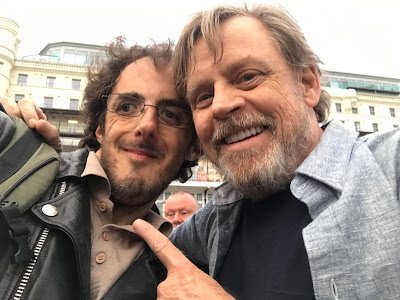 A short time ago in a seaside town, very very near...

Southend-on-Sea, a rather quaint seaside town in Essex, an hours train journey from London has paid host to some very interesting visitors.

The Pier itself (at just over a mile long boasts the title of longest pleasure pier in the World) has experienced fires, ships smashing into it and all manner of big names and television shows on it.

On Thursday the 7th of September, Luke Skywalker himself (Mark Hamill) chose to ditch his Island retreat of Ahch-To surrounded by sea to come to Southend-on-Sea.

Last Thursday seemed a pretty normal one.  I needed to get some Cat litter and food for Miss Kitty, I was going to wear my Harley Quinn t-shirt but chose to wear a beige t-shirt I've had for several years.  The weather seemed warm but living in Britain I knew it's a trap, so went out wearing my warm black leather jacket.

Once at the top of Southend high street I thought about going into the local toy shop to look for The Last Jedi Star Wars figures, they didn't have any in.  I then went down the high street to get some money out of the bank and that's when I checked Facebook (and like the Millennium Falcon, the FB app worked when I needed it the most) and saw that a friend of mine had just met Mark Hamill on Southend Pier!  I then made a few coordinates with the navi-computer and shot down to the pier asap, stopping for nothing.

At the pier itself I was told the next pier train out would be in twenty minutes.  No way on Mustafar would I wait for a train so I chose to take a VERY brisk walk up the pier.  I guess the mixture of excitement and intrigue that was whirring through me was reminiscent of what Rey must have felt when she was climbing the steps at the end of The Force Awakens.

With some peppermints and a cereal bar I made sure my blood sugar level was normal, the level of excitement whirred away inside and couldn't quite believe that I was getting closer and closer to arguably Cinema's greatest hero!

As my destination shortened, I saw the production crew filming Jamie and Jimmys Friday Night Feast (Jamie Oliver is a well known chef.)  Once by the set itself we caught a shot of Mark Hamill coming in and waving to us yelling out 'Hey Padawan!' This was actually happening, Luke Skywalker was on the end of the friggin Pier in Southend!  Only recently had I got myself a new iPhone so had plenty of space to take oodles of pics and videos.  From where I was I could hear the crowd inside applauding him, at one point he was actually taking plates of food to those inside the restaurant.

I had an idea of when filming would end and didn't really want to bother him for a quick pic as soon as he left the TV set and so chose to head back for shore.  Once back on dry land I got talking to a few fellow fans and we got chatting about how awesome it was that Mark was down here.  I chose to go down to the gift shop and purchase a Southend-on-Sea postcard, on the off chance that Mark may possibly sign it.

A few hours later and outside the closed gates of the pier there were a number of fellow fans who had amassed, the excitement and antici....... pation was through the roof.  First of all cook/chef extraordinaire Jamie Oliver came out of the pier exit to go to his car and so we knew it wouldn't be long for Mark to show...

Mark came out, saw us from where he was and gave us all a wave - the excitement level rose massively at that point  It looked like he and Chelsea were heading to the car, but then coming from the car he made his way towards us.  You could have heard a friggin pin drop!  In the video I shot, you can see Mark walking towards us looking at the gates like a boss as he said,  'Can we open the gates, or' he waved his hand, and the security guards, who didn't fall down choking obliged! (Jedi mind trick?)


The gates opened up and we were all lined up ready to meet arguably the greatest star that's visited Southend-on-Sea.  I was first in line to get a selfie with him, a picture I will perpetually cherish.  He also kindly signed my postcard, I had a crappy ballpoint pen which I held out for him which he briefly held.  The conversation went like this:

Me: *Holding out crappy ballpoint pen* Can you sign to Richard, please?

Mark: Here, hold that, I've got a better one. *Takes a sharpie out of his pocket*

Mark: *Noticing #Catwoman* Look at you with #Catwoman.

At this point I couldn't quite believe what was happening or what had happened hence why I was so speechless.  A short time later he was good enough to hold my #Catwoman figure and that meant an awful deal.

He spent time posing for pics with other fans, signing the odd autograph but for the most part it was ALL about getting pictures with a TRUE star and then after leaving us all on Cloud City he got into his car and with his window down gave us all a wave as he drove off

To think that back in the eighties I would gaze in wonder at all the Star Wars toys on sale in British Home Stores (Which has since closed down and did have a store not that far from Pier Hill.) The amount of times at school I used to run around in the playground pretending I was Luke Skywalker battling the imaginary Imperial forces or playing Star Wars figures with my childhood friend, (David.)

For the last ten years another good friend (Dave) and I, always start our conversation whether when we meet up or speak over the phone with:

And so, for this Fanboy, Luke friggin Skywalker coming to my hometown (my very first home was in Clifftown Parade which is literally a stones throw away from Pier Hill) and being on the doorstep of many Star Wars fans was something quite remarkable.  Even now it's already become the thing of myth, you just have to say, 'Did you hear about Thursday?'  A few days ago a bus driver after he'd sold me a ticket said 'Did you see Mark Hamill on the pier on Thursday?'

So, yep, a true Star from a Galaxy, Far, Far away visited a Seaside town very very near and with his very accommodating, and personable nature and kindness changed many people's lives whether they were four months old or well over four decades.  Just like Star Wars itself, Mark Hamill has thrilled audiences of all ages.

May The Force Be With You

P.S. Mark did say on his Instagram page, 'Great first visit to the lovely Southend- beautiful city, wonderful people' so I'm hoping he visits us again soon, and maybe pops into the local comic book store, Ace Comics which has oodles of Star Wars stuff in stock, I know Lea (the manager) and Russ would make him feel very at home ;)'

KingRichard76
41 year young Fanboy of Star Wars, who to this day is still thrilled watching Star Wars, as a youngster to present day whenever I'm on my bike I like to pretend it's a speeder bike racing through the trees of Endor ;)

Currently writing my first novel, daddy to a Cat called Miss Kitty and as well as being a Fan of all that which Mr. Lucas and Mr. Spielberg have brought to not just the big screen but fan culture worldwide I'm also a massive #Catwoman aficionado with currently two Catwoman tats, and getting my third next week.

A few months back I asked David (Bruce Wayne from Gotham) Mazouz to hold my Catwoman figure, so now both Batman AND the Joker have held her :) 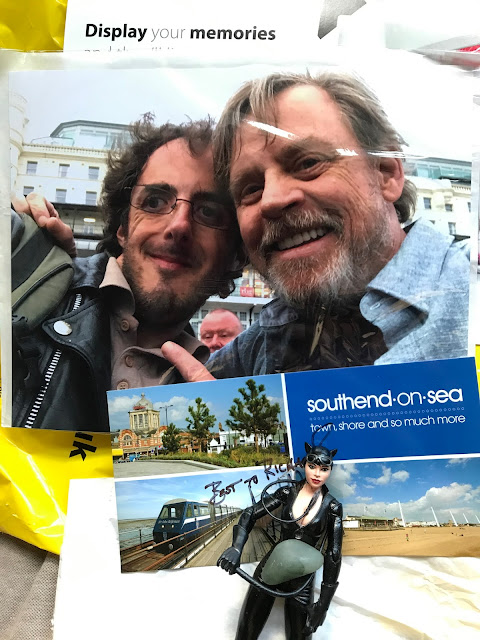