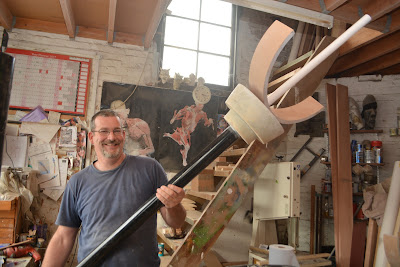 The second part of the making a replica x-wing trilogy sees - to paraphrase The Matrix - guns, lots of guns.  You can read part one here.

As this Star Wars universe giant jigsaw of a model won't be seen in all of its glory until it is fitted together all we see mouth-watering glimpses of what a huge project this is.

And it's all built by one man, Dave Taylor from Essex. Little wonder then that the first part chartering his own personal Star Wars journey amassed more than 2500 views in less than 24 hours.

This week is crunch week – which almost sounds like something from The Great British Bake Off - as in less than a week the mammoth project doesn't just have to be completed, it has to be constructed for a Star Wars-themed Feel the Force day which will see it being constructed during the night at a local shopping centre. 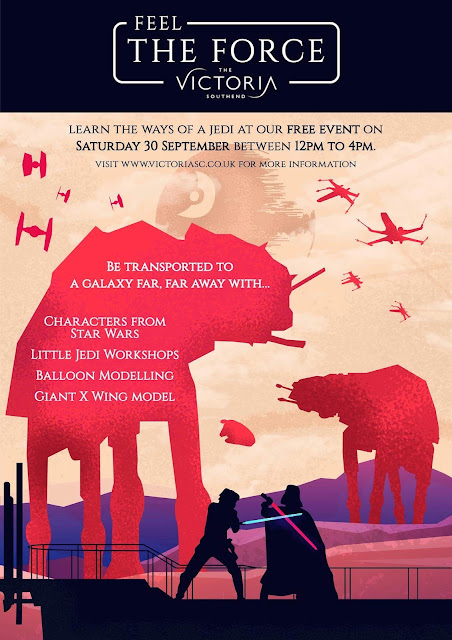 Exciting stuff, and that's something that it's artist,  sculptor and Star Wars fan Dave would say still say rings true. And even though he is the one recreating the iconic X-wing - first in his head and then one section at a time -  he is just as stoked to see his latest section of design come off.

Back to those guns, the Taim & Bak KX9 laser cannons, with laser tip, to be precise. Dave's creating two complete laser cannons on the starboard side and two partially destroyed ones of the downed craft on the port side, which will be a bit bent and incomplete, significant damage having been inflicted (rather handy as well due to budgetary and time constraints). 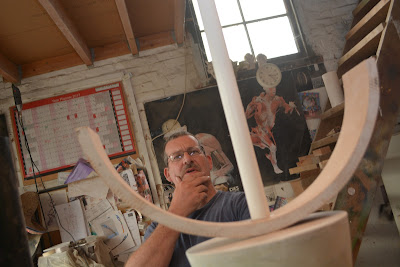 They were always the first things that got broken, bent or lost on your old Kenner X-wing – for the record I had the battle damaged one. There will certainly be no misplacing these monsters.

I pay another visit to his tiny industrial workshop where all his very own brand of light and magic is happening. I even make myself useful helping carry the various sections of the laser cannons down the hideously steep stairs so we can lay it out for the very first time. 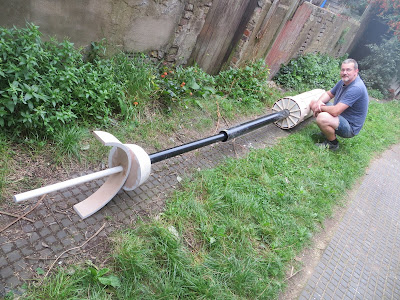 And it's big, the laser cannon section comes in at 17ft long, seeing it laid out on the floor gives you a real sense of scale of this thing and you can't help but mentally sketch in the rest of the ship when you have one recognisable element to latch upon. It will certainly take up a significant chunk of space.

Dave said: "For the first week I was doing this, all I was doing was cutting out circles that helped make the laser cannons, the thrusters, the engines. I'd cast the fibreglass elements and laminated elements the previous week but have been working on the laser cannons for a couple of days." 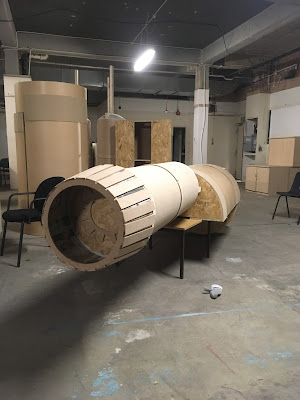 Dave, in his own words, has been something of a butterfly, flitting from one section of the design to another. He did admit though that the work needed on those instantly recognisable guns did take him by surprise.

"The thing I was surprised about was just how involved they were, there's just so many different aspects to them. I'm really thrilled to see it for the first time as all you see during the fabrication process are all the little bits that you working on as are scaling it up.

“And even then you don't know if it is going to look any good until you assemble it for the very first time, you've just got to have faith in the process.”

Of course, it looks great. It also gives a sneak peek of the bigger picture and Dave is viewing it both as a designer and as a Star Wars fan, the fan in him seeing it like us for the very first time. 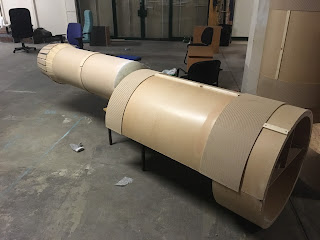 For a split second, laying it out on that drive way next to the grass it almost has the air of a speeder biker about it, perhaps Dave can get on that one next year for Return of the Jedi's 35th anniversary?

Although at the moment I don't think he can look any further ahead than next week, never mind next year.

As Dave’s workshop is not big enough to house all the completed sections of the fighter sections have already been transported to behind the scenes at the shopping centre. The engines were taken there in two parts, one a bigger intake engine, that looks like something from a jet engine, and the smaller thrusters at the back that sort of slot into the main turbine.

On impulse and out of fascination Dave slotted them together at the shopping centre and damn it there it was, the beginning of the X-wing. It was great to see it and that it worked and the beginnings of a real sense of scale.

Next he’ll need to start making headway on the wings and fuselage, which will be constructed out of particle board, MDF and joist-like timbers holding the wings up, as they’ll be quite heavy and so – even though there will be a cordon around the downed craft – Dave has to think about the safety aspect for kids and big kids alike.

And having been combat ready that of course means that the S-foil wings will be open for action, that’s exactly what we want to hear. Was there anything more satisfying as a child when you pressed down on your R2 unit to see the S-foil wings magically spring open.

Not having had access to blue or green screen technology at home – you couldn’t get that from Radio Rentals - I used to fly my X-wing in front of the Death Star trenches of the actual film for that added sense of realism.

Reaction since that first article came out has seen people virtually stopping Dave on Facebook from all over the country. It's even been liked by people as far away as Australia, not that they’ll probably be coming all the way to Southend. 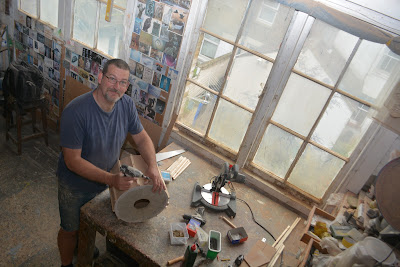 Dave said: “I’ve been getting lots of messages from people I don't know asking if I'm the guy who is building the X-wing. I think it's generating a lot of interest and it's great it is going to bring a lot of like-minded people together, some of them just to see what I have created.

“And all of that positivity is helping to keep me pushing forward on the project, lots of people are clearly very excited to see it.”

As we are in the middle part of our trilogy, technically this is our darker in tone sequel like The Empire Strikes Back. Well, the nights are certainly drawing in.

But in that same cinematic spirit perhaps we should end this second part on something of a cliffhanger.

Dave's only got a few days to create the fuselage and cock-pit, and (and the time of writing) there is a real chance that those materials he was going to use to create them are not going to be delivered until a day later.

You can’t help but feel a little helpless like Leia at the end of Star Wars waiting for the Death Star to clear the planet. There’s no X-wing fighter to save Dave though…not yet at least.

At best that's just four days to complete and transport ready for building. Still, he hasn't lost a hand or anything like Luke at the end of Empire.

He is sure that he'll be losing some sleep on Friday night though, still completing sections on the spot. Such things are the norm, even Disneyland - Disney of course now owning the Star Wars rights - was still being worked on moments before it opened.

Come Saturday morning we’ll know whether Dave’s creative gamble has been realised. We’ll discover what happens in the concluding chapter of the building an X-wing replica trilogy and whether his creation will take flight or will it crash and burn like Porkins? 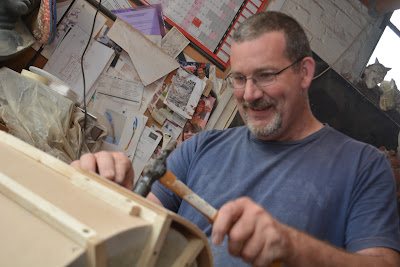 Dean Newman is Chief Writer at The Daily Jaws, writes his own film blog, Admit One, an
d previously wrote for Syfy. He’s always been a huge film and Spielberg fan, keen soundtrack and movie poster collector and is a budding script writer.